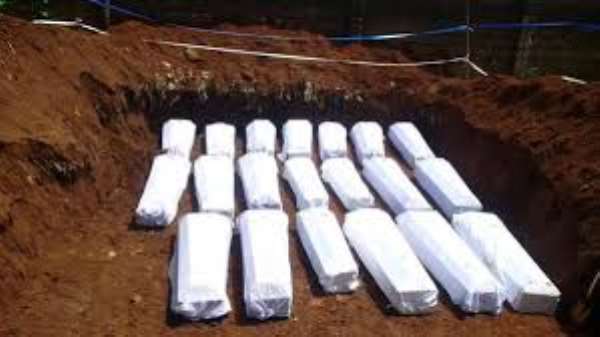 Some unclaimed bodies at the Upper West Regional Hospital Mortuary have been buried by the Regional Police Command to decongest.

It follows futile efforts to trace relatives of the bodies which were deposited at the morgue by the Regional Police Command after criminal operations.

A statement from the police and signed by the Regional Public Affairs Officer, Inspector Gideon Ohene Boateng, indicated that it had “no option than to liaise with the Environmental Health and the District Assembly to bury the corpse as the hospital authorities persistently requested the Police to remove the bodies as the mortuary is congested and creating an unbearable situation in the facility.”

Below are the locations and circumstances that led to the death of the deceased persons:

1. AT HALEMBOI/WA EAST DISTRICT: On 08/02/2020 an unknown male adult suspected to be of Fulani extraction was lynched by a mob at a robbery scene at Halemboi in the Wa East District.

2. AT TAKPO: On 13/08/2020 at Takpo, about 5:40 am, six armed men of Fulani extractions were involved in a case of robbery and two of them were gunned down by Police and one was lynched at Siiro by a mob.

3. AT CHARIA: On 7/06/2020 about 2:00 am, an unidentified man, aged about 26 years suspected to be of Fulani extraction was lynched at Charia by mob where he and his accomplices attempted to rustle cattle at Charia near Wa.

4. AT PIISI: On 24/08/2020 about 2:30 am, a young man aged about years and of Fulani extraction was armed with a gun and one, another accomplice now at large intercepted a Sanyong mini bus other with passengers being escorted by Police from Sawla to Wa. He was shot by the Police when they attempted to rob the passengers.

5. AT BUSA ON WA BULENGA ROAD: On 5/09/2020 about 0230 hours five armed men were robbing road users at the outskirts of Busa along the Wa-Bulenga road. The robbers on seeing the police engaged them in a shoot-out and one of them believed to be of Fulani extraction, aged about 30 sustained gunshot wounds and died but the others managed to escape.

In a related development, the Police has impounded a number of motorbikes in a robbery operation at Takpo and also retrieved 17 assorted mobile phones in similar operations.

The public is has been asked to assist in the identification and collection of the motorbikes and mobile phones as soon as possible.