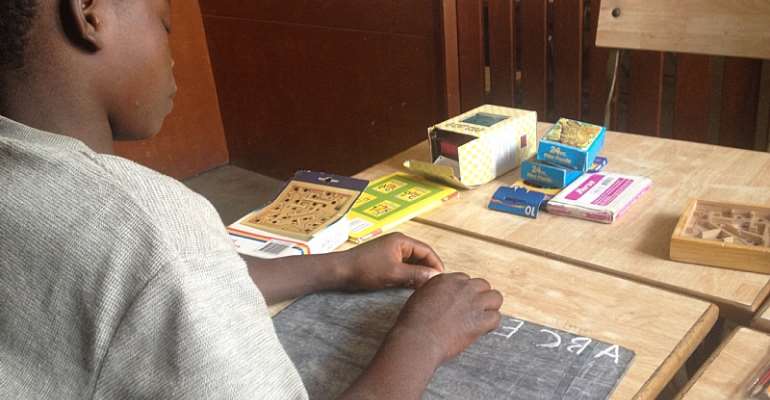 October every year is recognized worldwide as Dyslexia Awareness Month, dedicated to raise awareness and tell stories about how Dyslexia can be managed. Dyslexia manifests itself in difficulties in reading, writing and spelling. Some typical signs of Dyslexia include difficulty recognizing letters; matching letters with sounds; reversing words; and confusing letters that look similar, such as 'm' and 'w'.

Dyslexia is a life-long condition and affects a person's ability to read and write irrespective of age or access to education. This in turn impacts on learning outcomes, social skills, and employment. Dyslexia is often considered an invisible handicap because it has no physical or visible signs.

According to Dyslexia International, about 10 percent of the world's population show traits of Dyslexia. This implies that in a class of 30 children, at least three of them are likely to show signs of Dyslexia. Available data also suggests that approximately 20 percent of out-of-school children in Ghana shows signs of learning difficulties, predominantly Dyslexia, indicating a link between Dyslexia and school drop-outs.

Dyslexia is generally hereditary and is not directly related to low intelligence, poverty or a spiritual problem. Help Guide Organization indicates that Dyslexia is caused by specific neurological differences in the brain that affects a person's ability to store, process, receive and/or communicate information.

It is, therefore, important for persons with Dyslexia to understand that having the condition does not mean they are not intelligent. It just means they learn differently from their average developing peers. This implies that with early identification and the right support, persons with Dyslexia can succeed in life.

The consequences of undiagnosed and unaddressed Dyslexia can cause serious psychological, emotional and social problems such as low self-esteem, depression and anxiety. Studies suggest that students with Dyslexia are six times more at risk to drop out of school because they face persistent challenges with reading and spelling. This can lead to rise in out-of-school children, vagrancy, crimes and delinquency, unemployment and loss of productivity.

The positive side of Dyslexia is that many persons with the condition have creative abilities in art, music and qualities associated with entrepreneurship. Examples of renowned personalities with known Dyslexia traits include English entrepreneur and philanthropist, Richard Branson; German scientist, Albert Einstein; and American actress, author and TV host, Whoopi Goldberg.

In Ghana, major factors hindering support for persons with Dyslexia are general lack of awareness and recognition, and the absence of accommodative resources in mainstream schools. Children with Dyslexia are often labeled as lazy or dumb. Parents then give different interpretations to their children's failure to perform well. Sadly, some seek spiritual help and in some cases resort to punishing the children. Teachers and educators are unable to effectively match instructional formats to the learning needs and potential of children with Dyslexia due to limited capacity and absence of inclusive systems in mainstream schools.

The Special Education Division of the Ghana Education Service should collaborate with relevant Civil Society Organizations and institutions to raise awareness among parents and the public in general to help promote positive behavior change towards children with Dyslexia.

Also, assessment centers should be established in all regions and districts, which should have the capacity for early identification and provide support systems for children with Dyslexia.

Furthermore, the capacities of teachers and teacher trainees should be built on Dyslexia to enable them make their classrooms inclusive for pupils with Dyslexia.

Parents and teachers, if you see signs of Dyslexia in a child, speak up! Advocate and push for the right education that is compatible with your child's learning needs!

The writer is the Project Director of Special Attention Project, a Ghanaian NGO working for the rights of children with learning difficulties.

Your independence will be respected – Akufo-Addo assures new...
24 minutes ago

He has the capacity, intellectual strength to succeed – Akuf...
29 minutes ago