Borborliborbor: Did Mahama Survive The Tsunami But Overlooked The Hurricane? 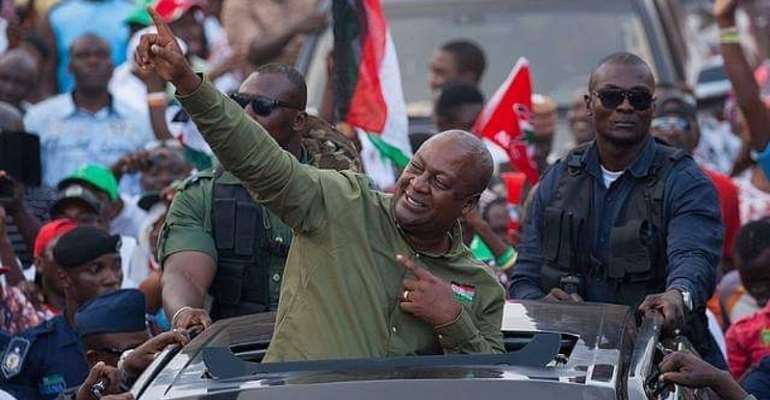 In a time of ours, one cannot markdown the importance of sonic advertisement and packaging in a competitive product market. Aside from the genre of music, the distinction between Shatta Wale and Patapaa is largely based on how both artists packaged and tailored their musical products to the world.

Just as this analogy, a retrospective analysis of the NDC campaign in the 2016 general election speaks no otherwise. In a state of naivety, one still wonders why the NDC lost the election even though they had “Mahama Paper” and “Onaapo” songs which were arguably the vogue songs of that season and goaded huge crowds at their campaign grounds.

Undoubtedly, these sonorous songs have the potential of drawing even the physically unfit person to the campaign ground but the wise among the choir will always ask, behind the earsplitting sound what is the message in these songs?

Absolutely, there was little information in those songs to vaunt their massive infrastructural drive and of course little to vaticinate a greater hope for the Ghanaian electorates. To put it better, the crescendo of the "Boom Boom" waves inversely diminuendo the messages contained in these songs, and the effect was the many cavorting we witnessed in place of the reflective and attentive mood expected from the people at their 2016 rallies.

Well, the open-minded people danced to the tune of these songs and copycatted the Mahama-Usain Bolt gestures but got no convincing message therein to guarantee a vote for the NDC. To many of the level-minded people, it was a moment to funfair their frustrations probably on the most corrupt and underperformed government in our history as labeled at the time.

Comparatively, the NPP 2016 campaign songs were rich with information. For instance, in one of the NPP songs, they indicated that Ghana was in crisis and enumerated the economic frailties faced by the country under John Mahama and a promise of heaven-earth for mother Ghana. In fact, they sang it in a breezy tone that fitted religiously into their message.

Their musical appeal resonated well with the mannerisms of the then-candidate Akuffo Addo who was on alms for votes (but not Usain-Bolting around). Perhaps, lessons from their 2008 and 2012 buzzing song titled "Nana Aye Winner" akin to " Onaapo, Borborliborbor and Mahama Afa" might have contributed to their change of song in 2016.

The NPP 2016 musical notes gave electorates no space to dance than to nod, reflect, and meditate over their children’s future. Convincingly, through this art, Nana Addo succeeded in selling his political merchandise to Ghanaians and the profit was a supernormal one after 7th December 2016.

In defiance of past experiences, the NDC 9th Delegates Conference at the Trade Fair Center and their Presidential primary were climaxed with the playing of the “Borborliborbor” song as the John Mahama (NDC) campaign track for 2020. I asked myself, is this going to be a painful lesson for the NDC to learn again? Has the former President survived the party tsunami but suddenly overlooked the hurricane that ripped him off in 2016? Just as “Onaapo” and “Mahama Paper” belted with no convincing message so as Borborliborbor.

Yet again, Borborliborbor is another sonorous track of catchy phrases and an easy chorus for electorates to dusty their legs on the sandy ground without driving any message of hope home. What should be remembered is that the people (the impartial citizens) that rejected Onaapo and Mahama Paper are still alive and even multiplied the more to reject Borborliborbor. In a battlefield, what is important is the strategy not the selection of generals.

It is true that the NPP is making worst and unpardonable mistakes in government. The NPP has indeed graduated corruption and indiscipline from the outer cycles of our discourse to the inner cycles of the Presidency. This is justified by the horrible “galamsey” saga and the numerous corrupt scandals (Oslo Chancery deal, Cash for seat saga, etc) lined against the presidency and government. It is obvious that indiscipline under this government has reached a height never experienced in the 4th republic.

A manifestation of this is the recruitment of political gangsters into the security sector to provide services that they already had control over... Regardless of the unprecedented appointments at the security sector. This is a clear indication of an anomic society- emanating from the breakdown of systems and values. Nana Addo has indeed failed us greatly!

Notwithstanding, the NDC cannot ride on the iniquities of the NPP to come back to power if the same old ways are to be maintained. If the NPP is seemed to be aggravating the errors of the NDC but Borborliborbor cannot and can never be the surest message or ad for bringing the NDC back to power in 2020. It can convince no electorate other than the politically skewed person whose stomach is his only utmost care.

I am not in any way seeking to discourage musical tones usage in campaign songs but it should be dressed with convincing and stimulating messages that will awake dulling memories on the socio-economic realities of the time. Whether we like it or yes, we cannot discount the significance of music in disseminating political messages in our time. However, it should be a direct and unambiguous musical message with a soothing tone that falls straight into the heart without further questions.