The Commissioner-General and the Sod Cutting- General: Which of the titles is relevant to the Ghanaian Voter in 2020? 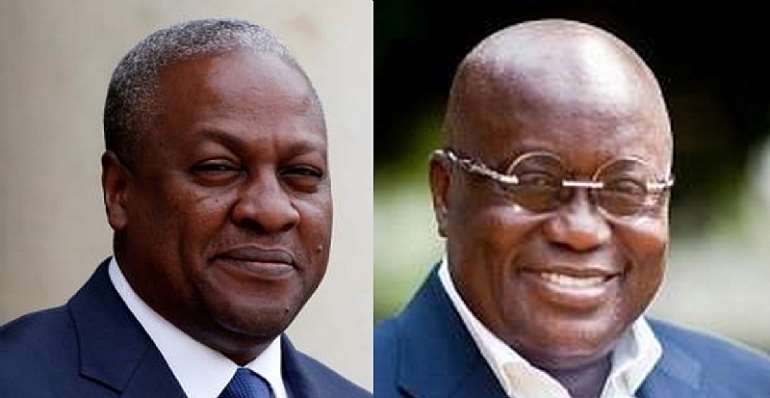 The political space in Ghana is very polarized especially between the ruling New Patriotic Party (NPP) and the National Democratic Congress (NDC). This polarization thrives on numerous partisan propaganda and name-calling, some of which are derogatory while some are just for humour. one may recall names or expressions such as, 24th kɔ wo krom, Ellembele Mugabe, Lawra Nandom Kabila, World Bank, all die be die, Commissioner-General, Sod Cutting-General, dead goat syndrome, incompetence, you and I were not there, gentle giant, Mr. Boom, Clearing Agent, Boromiah, Babies with Sharp Teeth, King Promise, President do little, Papa No, Asomdwehene, Opana, Dzelukope Mafia, Akyem Sakawa Boys, Gargantuan, Hotel Wawaa and many more. Two of these Ghanaian political jargons that interest me most especially in this time of the 2020 political season are the Commissioner-General (CG) tag placed on Former President John Mahama in 2016 by his political opponents and the Sod Cutting-General (SCG) currently placed on President Akuffo Addo also by his political opponents. Which of these titles holds evidential relevance for the Ghanaian voter? Are the events (commissioning of completed projects) and (sod cutting for upcoming projects) really necessary or they are avenues for wasting official time and taxpayers’ money?

Fmr. President Mahama as the Commissioner –General in 2016

Fmr . President Mahama was given several names or titles during his tenure as the President of Ghana. One of those titles his political opponents gave him in 2016 was Commissioner- General. This was because prior to the 2016 elections and immediately after the elections, he inaugurated many developmental projects completed by his administration. The completed project inauguration (commissioning) was widespread hence his political opponents of the NPP named him as Commissioner-General.

Notable among the monumental projects Fmr. Presient Mahama inaugurated were the Ridge Hospital, New Senior High School Blocks, Shai Osudoku District Hospital at Dodowa, Kotokoraba and Kedjetia Markets, Terminal 3 of the Kotoka International Airport as well as the Ho Airport. In almost every Region he went, Mahama inaugurated or commissioned a completed project thereby justifying his Commissioner-General title meant to derogate him.

Paradoxically, President Mahama’s opponents who gave him the CG title again inaugurated some of the projects already inaugurated by the Commissioner-General. For example, the Ridge Hospital was inaugurated again when the NPP came to power in 2017. It follows the George Orwell’s Animal Farm Rule that states that four legs good, two legs bad.

The Commissioner-General’s political opponents equally claimed that most of the projects listed in the NDC’s Green Book did not exist. Little did we know in 2016 that once upon a time in 2020, there will be an NPP computer application displaying Nana Addo’s achievements in Office and these achievements will be disputed by the targeted beneficiaries and not his political opponents per se. How time flies, and how the waves capsize the boats huh? In a typical English Grammar class where we are normally required to fill in the blank spaces, the question would have been posed: NDC is to a Green Book as NPP is to…………. (a) Yellow Book (b) Computer APP (c) Manifesto.

It must be noted that most of the projects inaugurated by the Commissioner-General were done within his four-year tenure, from 2012 to 2016. One may assert that he had something tangible to show, which the media published both electronically and in print. The Green Book would therefore not serve as the only source of verification. He lost that election, though.

President Akuffo Addo as the Sod Cutting-General in 2020

Just like his immediate processor (the Commissioner- General), President Akuffo Addo has also been given several names by his political opponents since he took office on January 7, 2017. One of these political opponent given names or titles is Sod Cutting –General.

Not too long after the NPP came to power in January 2017, the Senior Minister, Mr. Yaw Osafo Marfo made a profound pronouncement to the effect that physical infrastructural projects were not the priorities of the Akuffo Addo Administration. At the initial stages of the Akuffo Addo Administration, the Senior Minister used to make certain pronouncements as though he was the President.

It was therefore not surprising that the Nana Addo Administration focused more on the Free SHS Policy Implementation virtually to the neglect of physical infrastructural projects. Even though the Administration did not initiate massive infrastructural projects as done by the Commissioner-General, most of the uncompleted projects the Commissioner-General left behind have also been abandoned. One can cite the Kumawu Hospital Project and the Saglemi Affordable Housing Project as examples of existing uncompleted projects that the Akuffo Addo Administration did not continue with.

Fast forward and prior to the 2020 elections, it appears that the Akuffo Addo Administration did not have much infrastructural projects to inaugurate or commission so the President has decided to go on a sod-cutting spree. Sod cutting is an assurance that a project will soon start. In fact, there were so many earmarked projects that sods were cut for but the projects were never started at all let alone see completion.

This widespread sod-cutting strategy by President Akuffo Addo in an election year did not go unnoticed by his political opponents especially those in the NDC. It became an issue of national discourse and just as his predecessor John Mamama was named as Commissioner-General, Nana Addo was also named as Sod Cutting- General. The Commissioner –General title placed on John Mahama in 2016 has metamorphosed into Sod Cutting -General for Nana Addo.

Knowing that infrastructural projects started by one political party in power are often abandoned by succeeding parties, it is worrisome that the Sod Cutting -General has cut sods for several projects in the 2020 election year. The worrisome rhetorical questions are that if the President does not win the 2020 election, will his successor start those projects he cut sod for? Are those projects listed in the 2020 budget or they are manifesto projects meant for execution with the 2021 budget? Why is the President doing last minute sod cutting for numerous projects? Is it his developmental strategy to cut sods at the latter part of his four year tenure or it is just a mere vote winning strategy? Will he truly execute those projects until completion if he wins the upcoming elections or they will just be one of those political mirages called gimmicks?

Interestingly, when Nana Addo’s widespread sod cutting became a topical issue in the country, some of the media houses changed the sod cutting to groundbreaking. For example, on September 11, 2020, www.myjoyonline.com published a headline that reads, “Nana Addo breaks ground for Accident and Emergency Centre at Dormaa-Ahenkro” On September 13, 2020, www.ghanaweb.com also carried a headline that reads, “Akuffo Addo breaks ground for rehabilitation of Bechem-Techiman- Akumadan Road”

What I know is that communal entitlement to public toilets will pass as one of the fundamental human rights. It is a basic requirement that communities must have descent places of convenience. To my mind therefore, not even a District Chief Executive should tout building of public toilets as an achievement, let alone the Vice President of Ghana. We should not lower Ghana’s bar of reputation on the global stage to attract unnecessary mockery.

Toilet is a basic need so its construction should not warrant displaying as though it was a colossal achievement. We should rather inaugurate very monumental projects and not toilets. In fact, even Section 118 (1) (f) of the Labour Law, 2003 (Act 651) recognizes the basic need for toilets and therefore requires of employers to provide separate toilets and other amenities at the workplace, for both male and female workers. I thus see no reason why the presidency would like to make us believe that building of public toilets is a monumental achievement. If anything at all, if we do not have any completed projects to inaugurate or commission, then it is better we cut more sods or break more grounds for new projects than to inaugurate public toilets.

Are Presidential Commissioning and Sod Cutting Ceremonies Necessary at all?

Methinks that presidential sod cuttings for projects and inauguration of completed projects is time and revenue wasting. It is another avenue for corruption. In fact, if the leaders of the developed countries want to be cutting sods for projects and inaugurating completed projects, then they would not have time to do any official work. I doubt if President Trump or his Vice would commission public toilets.

In my view therefore, our Presidents should stop those activities. Commissioner-General or Sod Cutting- General should not be any enviable title. Be that as it may, which of the activities is better? To engage in widespread commissioning in an election year in Ghana or to engage in widespread sod cutting in another election year in the same country?

The 2020 Ghanaian voter will need to decide which of the titles justifies disbursements from the public purse and how that adds value to standards of living in the country. Coincidentally, both the Commissioner-General and the Sod Cutting-General are contesting again as presidential candidates in the 2020 elections. Perhaps the commissioning and the sod cutting will be deciding factors for the electorates especially the floating voters who believe in infrastructural projects.