South Africa coach Ntseki under fire after loss to Zambia 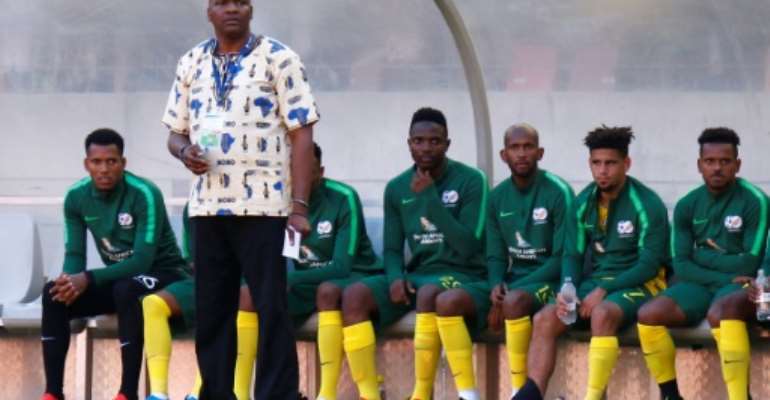 South Africa coach Molefi Ntseki was slammed by supporters on social media after a 2-1 home loss to Zambia on Sunday in an international friendly.

He was accused of being "tactically bankrupt", "clueless and directionless" and "lacking a strategy" in tweets when the home side conceded two late goals in Rustenburg.

Former national under-17 coach Ntseki was a shock appointment when England-born Stuart Baxter quit last year. Ntseki had never played for, nor coached, a professional team.

All the goals came from substitutes with Keagan Dolly putting the hosts ahead on 66 minutes behind closed doors due the coronavirus pandemic.

It was the second poor performance within four days by South Africa after they failed to protect a lead in a 1-1 draw with Namibia at the same ground.

While better results were expected against lower ranked opponents, it was the lack of South African fighting spirit that angered supporters.

Ntseki blamed the loss on a first-minute injury to Lyle Foster, which forced the Portugal-based forward to go off.

"The injury messed up our plan and our rhythm. We gave the ball away too cheaply and conceded a lot of corners," he said.

"We were better in the second half but I detected a lack of confidence and belief among some of my players."

Serbia-born Milutin Sredojevic debuted as Zambia coach last Wednesday with a 1-0 win over Malawi in Lusaka and his team fell 2-1 to Kenya in Nairobi two days later.

"It was tough playing three matches in five days but one game is equal to 50 training sessions," said the former Rwanda and Uganda coach.

"I was particularly happy with the team spirit as I strive to lift Zambia from the doldrums after failing to qualify for the last two Africa Cup of Nations tournaments.

"This is a very young squad with an average age of 24 and my ambition is to make Zambia a force to be reckoned with again."

A brilliant pass from Percy Tau enabled Dolly to round goalkeeper Sebastian Mwange and tap the ball into an unguarded goal to give South Africa an undeserved lead.

Kampamba equalised with a low shot that beat Darren Keet at his near post. Zulu finished off a cross to give Zambia victory.

Both countries are preparing for 2021 Africa Cup of Nations qualifiers next month with South Africa due to face Sao Tome and Principe home and away while Zambia meet Botswana twice.

Meanwhile, 10-man Tanzania fell 1-0 at home against Burundi with Saido Ntibazonkiza scoring the only goal on 86 minutes in Dar es Salaam.

Tanzania's Jonas Mkude was sent off after a second yellow card 12 minutes from time.

Germany-based Cebio Soukou broke the deadlock. He then took the corner that Steve Mounie scored from as Benin beat Gabon 2-0 in Lisbon.