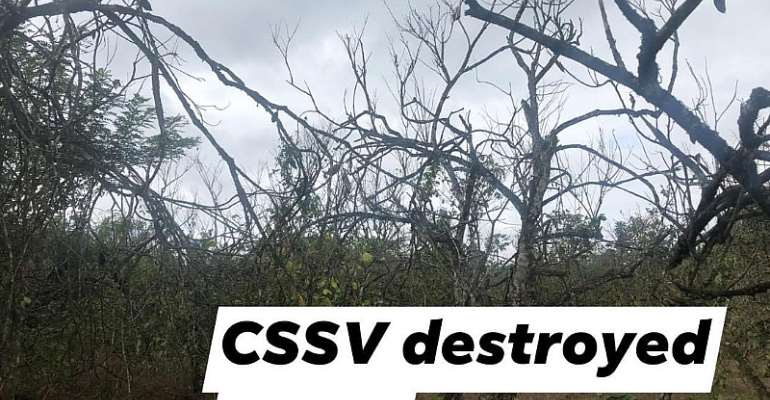 Former President John Mahama left a very bad consequential legacy on Ghana's cocoa industry as his Government disappointingly and disgracefully stopped sponsoring the rehabilitation of Cocoa Swollen Shoot Virus Disease (CSSV) infected farms in 2014, a policy that has been in practice for years prior. The previous policy had COCOBOD/government sponsoring the cutting down of CSSV infected trees accompanied with cash ex-gratia payments to farmers who are deprived of their livelihoods due to the loss.

Western North, the region with the largest cocoa cultivation area has lost its prestige top position of producing an annual biological average of 350,000 tonnes few years ago to a disgraceful output of 150,000 tonnes.

Sadly, majority of cocoa farmers in affected regions of Western North, Western South and Brong Ahafo will not enjoy the 28% increase in cocoa prices. These farmers cannot enjoy a penny even if cocoa prices are fixed at GHS 1,000 per bag (GHS 16,000/tonne). Cocoa trees on their farms are destroyed for good thanks to the fast spread of Swollen Shoot in those years of neglect The only remedy is to cut down the trees and rehabilitate the farm with new plantings.

It's not surprising that most farmers who have lost their primary source of livelihood started migrating out of the regions that they have labored for decades to generate revenue for Ghana.

Majority of farmers in Western North are seen to be NDC sympathizers, yet neither their Members of Parliament, Traditional authorities nor MDCEs showed any common-sense and concern to petition Dr Opuni or President Mahama on that unwise and detrimental decision which affected livelihoods of over a 100,000 cocoa households. I guess they are happy now!

Ghana's economic loss to the Cocoa Swollen Shoot Virus is estimated at US$ 300 million annually.

Ironically, the NDC has realized the stupid policy decision and thus proposed a reversal in its 2020 manifesto.

It's refreshing that the current NPP government has prioritized the need to rehabilitate CSSV affected farms to offer farmers renewed hope in few years to come. We recommend a continued aggressive approach, with effective monitoring, to facilitate a quick turnaround in productive capacities in these regions.

So Much Noise On Cocoa Roads
The NPP and NDC can noisily compete who constructed more 'shoddy roads' in cocoa regions but the bottom line remains “What level of investments are either government putting in place to enhance cocoa output for increased revenue to build better rural roads?”