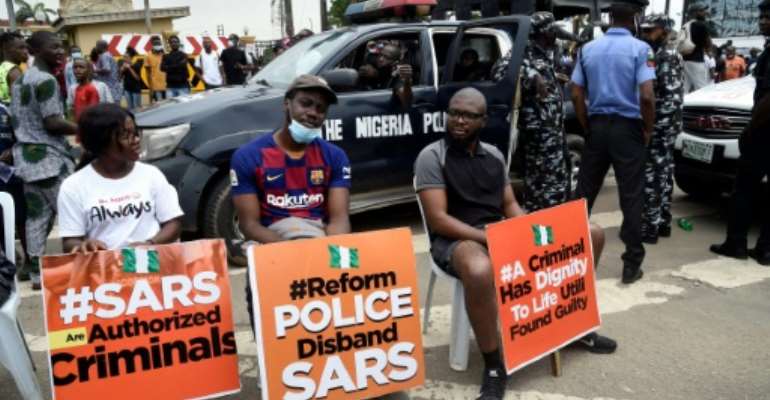 The decision came after mounting pressure from rights groups and activists. By PIUS UTOMI EKPEI (AFP)

Nigeria on Sunday announced the dissolution of a special police unit tackling serious crimes after an outcry over alleged abuses from rights groups and protests both in the streets and online.

The president's office and the Nigeria Police Force announced the dissolution of the Special Anti-Robbery Squad (SARS) with immediate effect.

The police statement also announced an investigation into allegations "of crimes committed against citizens", adding that "the culprits will be punished".

The investigation will involve human rights groups and civil society organisations, it added.

Former SARS officers are to be redeployed into other units.

Sunday's announcement comes after growing anger over the past week expressed on the streets and on social media over the group's alleged abuses.

On Friday, hundreds of people marched in many of the main cities in the south of the West African country calling for the SARS unit to be reformed or disbanded.

In June, a report by Amnesty International listed what it alleged were 82 cases of torture, ill treatment and extra-judicial execution by the SARS between January 2017 and May 2020.

The abuses were carried out under the supervision of high-ranking officers, it said.

It accused the squad of the "systematic use of torture" and alleged the existence of torture chambers within the Nigerian Police Force.

The force said Sunday also said it would set up a mechanism to prevent future abuse.

A "Citizens' and Strategic Stakeholders' Forum" will have regular contact with the force at all levels to address issues of concern, it said.

Growing concerns over the conduct of the force exploded after a recent video went viral showing the alleged killing of a man by a police officer in Delta state -- footage that authorities denied was real. The arrest of the man who shot the video sparked even more outrage.

On October 4, when SARS was suspended and reporters questioned Nigeria's vice president about the issue, he denounced police violence.

"I'm very concerned, in fact, very angry about what I see happening to young men and women who are arrested, in some cases maimed or killed by men of the police force," Yemi Osinbajo said.

A number of Nigerian celebrities joined the campaign against the SARS units and at one point on Friday #EndSARS was the top trending Twitter hashtag in Nigeria.