People Create Wealth Not The Government 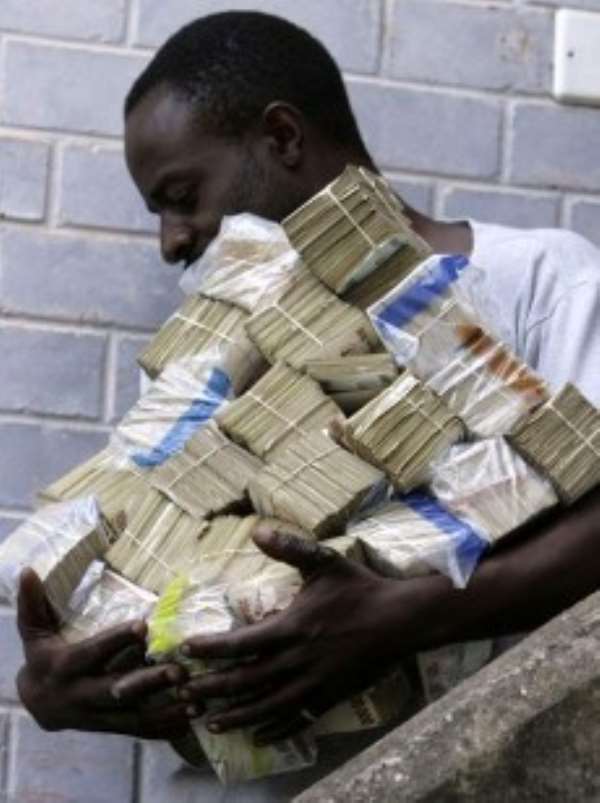 Africans have come to understand that we elected most politicians whose mission is to enrich only themselves and their nuclear families; not to give a decent life to their people or communities. They have been taken by Western Individualism and are overwhelmed by the gratification of exotic tastes and culture that value individual interests over the commonwealth. Making a living in Africa to afford such exotic indulgence requires a great deal of foreign cash.

We have to go back and examine the history of our wealth. Not only how we had developed so much wealth in Africa that attracted many individuals and groups from Europe, America and Asia but how individual leaders sold out and lost most of the wealth due to greed. Those of us old enough remember the saying that nobody dare steal money from his village.

We had developed African wealth from the ground up by collective contribution to a pool of money called Esusu; upon which we took turns to collect contributions, started many businesses and built projects. Each of these projects benefited not only the individuals but the whole community that patronize one another within the local society. These were how our local Transportation, Banking and Insurance survived. Local patrons nourished them by trust within towns and villages.

Government sets political agenda and economic policies. But at the end of the day, individuals have to figure out how to attract patronage that will put money in his pocket. Many of us have become so reliant on Governments we think it is the answer to all our problems dulling our mental acuity to create wealth from which a good tax base can be generated to enhance an enabling environment. People react differently if money is stolen from their personal taxes than income from Natural Resources. Politicians get it, stealing from natural resource income.

Unfortunately, politicians can no longer distinguish between individual self interest and government or community interest. Over reliance on Governments have been disappointing. Only jobs that cannot be done by individuals like schools, hospitals or big projects and safety against abuse like regulators, inspectors and police should be done by the government. This is when government business is everybody's business compared to nobody's business.

People are blessed with individual ideas, talents and skills that can only be manifested from personal reflections into discoveries and refinements of old ideas. It does not eliminate brain storming with others to refine and shape national interest and new ways of improving our lives. The old forms of creating wealth are no longer efficient. Agriculture used to be the biggest employer of labor, not anymore.

Machines and better technologies have replaced the cheapest labor. Tricycle tractors locally made and other new skills are needed to operate those machines just as the computers have evolved.

When there are endeavors beyond the capabilities of one man, communities can get together. These have to be a collective effort. Some individuals gain from this collective effort than others that do not know how to sell their services or goods to a wider audience. In order to be successful, personal drive and responsibility matter. Even as a landlord, you need good paying tenants and maintenance managers today.

African countries must accept that we put too much trust on leaders that have failed us miserably. We cannot regal on past history of the Great African Empires, they no longer exist. But a reminder of what Africans are capable of. Our successes have been replaced by Poverty while looking up to the rest of the world to bring us to their ways of survival out of the goodness of their hearts. It is not going to happen.

We are the tolls they continue to exploit to enrich themselves. They expand their markets looking for patrons by dumping new, used and discarded goods and services on us. There is nothing wrong with trading with the rest of the world, but it was wrong when we exchanged Gold for mirror, slaves or cheap labor. In the name of trade, we batter valuables for superfluous insubstantial goods.

We have to go back to the drawing board and the pillar of our Economic Success. We traded with one another before we traded with the rest of the world. But we have lost the trade within in search of outside trade. Africans' worst mistakes were exposure of our wealth by Mansa Kanka Musa and the Queen of Sheba prompting seekers of fortune to follow them home to the source of their riches. It was foolish and unproductive from day One.

It is true that the world elected their leaders in their self interest to defend themselves by sending standing Army everywhere protecting missions. Even when on Adventure, ensure an enabling environment: Laws or Papal Edict of 1452 to encourage groups and individuals to create wealth by enslaving others for plantations. More importantly, they created hierarchies as pyramid schemes to load up wealth at the top and paid taxes to their home governments.

The Catholic Church discouraged kinship and extended families in favor of individualism, monogamy and banned marriages within families. Not bad. Their monarchs still married within families though. While Africans focus on: It Takes A Village To Raise A Child, valued close relationships and interaction, Western society went beyond Catholic doctrine to Me, Myself and I doctrine as seen in African leaders today. Wealth and Riches that were shared within the families and community were bequest to Catholic Church. Today as tithes, zakat and for building Church and Mosque instead of factories.

WEIRD Society (Western, Educated, Industrialized, Rich and Democratic) by Joseph Henrich at Harvard University described the characteristics of the cultures that value individualism at the expense of the community. "As European societies became increasingly dominated by monogamous nuclear families in the High Middle Ages, for instance, the laws being created centered increasingly on the individual and on their intentions, rights, and obligations as separate from their kin groups." These laws and forms of government were imposed on Africans by colonial powers as the new Gospel truth.

Take the case of monogamy and polygamy. Wealth created by an individual goes to an individual nuclear family, that is, the wife and children in a monogamous family. If there were no surviving children, the wealth went to the Catholic Church. In a polygamous families, wealth went to immediate and extended families. Most people do not realize that the Catholic Church enforced monogamy in the Western Democracy for self interest.

Some Thinkers have concluded that this Catholic doctrine that spread worldwide but culturally resisted in Asia, is one of the contributing factors to the wealth disparity in the world, greatly leaving Africa naked culturally and poor. Individualism culture competes with African traditions for obedience to authority and other factors that help Africans protect assets, like land and farms from outsiders.