By Benjamin H. Bradlow - The Conversation 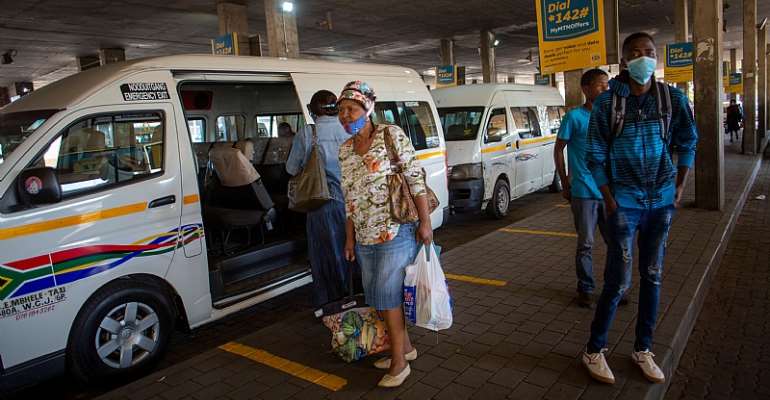 Profit margins in South Africa&#39;s minibus taxi industry have been under pressure long before the COVID-19 lockdown. - Source: Karel Prinsloo / AFP via GettyImages

When South African Transport Minister Fikile Mbalula announced recently that the government was considering a R50 billion subsidy to the minibus taxi sector, it seemed a watershed moment.

The sector transports 66.5% of commuters , and has been hit hard by the sharp economic contraction that was deepened by the COVID-19 lockdowns since March .

Buses and train services receive operating subsidies from the government. These are critical for containing fare increases, which are regulated by government. They are also key to establishing an operating model that can withstand temporary, short term shifts in user behaviour.

Despite many promises, taxi operators have only ever received capital subsidies to repair and replace old vehicles, beginning in 1999 with the “taxi recapitalisation programme” . The main goal was to ensure vehicles were safe; essentially providing a one-off payment to buy new vehicles. This did little to address the core, recurring costs that drive the sector's economics.

I argue that a new proposed government subsidy for minibus taxis, for which most of the details have yet to be announced, should focus on guaranteeing the viability of taxi operations. Some may be wary of securing the future of the taxi industry given its largely deserved reputation for poor labour relations , substandard service and violence .

Precisely because of these seemingly intractable problems, an operational guarantee is likely a necessary condition for enabling meaningful reform, plucking the industry from its low-level equilibrium.

In South Africa's largest cities, such an approach could make possible a more centralised mode of fare collection by municipal authorities. This would enable an integrated fare across multiple legs of a trip, potentially saving users money for a service that accounts for more than one-fifth of most poor households' average expenditure .

I draw on my comparative research on the governance of urban public goods in Johannesburg and São Paulo, Brazil, to explain why this operational subsidy can kick start a broader programme of public transport reform.

This research compares each city's attempts to reform the governance of three types of public goods — housing, sanitation, and transportation — after transitions to democracy.

Research on the transport sector in cities of the Global South has tended to focus on possibilities for technological innovation. This research has focused much less on the institutional changes that are necessary to effectively implement transport policy reform.

The economic model of South Africa's minibus taxi sector has never been fully transparent. As the post-apartheid government began investing in black townships in the mid to late 1990s, the sector was stuck in a dangerous spiral of incentives that encouraged cutthroat competition. The consequences were often violent.

There was no way to stop new entrants, other than a very thin licensing regime that focused on the quality of the vehicles.

This regime served as a form of implicit deregulation: competing taxi cartels continued to expand their fleets in order to capture ever thinner slices of a captive market. The need for their service grew as new urban employment centres sprawled into former white suburbs.

Black townships and informal settlements likewise mushroomed, with the fall of apartheid-era population controls. As the customer base grew rapidly, the supply of taxis grew even faster.

Today, the sector remains cash-based and its employment relations often exist in a gray zone of formality. Most reliable estimates place operations — especially labour and fuel — at the centre of its cost structure .

At the level of policy, the National Land Transport Act of 2009 gave cities a mandate to develop their own transport plans. It also legislated the provision of funds for the “recapitalisation” of the sector. A Bus Rapid Transit system bus in competition with minibus taxis in Johannesburg. ansoncfit/Flickr

In addition, some cities have pursued a technology-led reform strategy. “Bus Rapid Transit” systems gave some taxi operators ownership shares. But most operators were excluded and exist in direct competition with the bus system.

A decade after the first phase of Johannesburg's bus transport system began, it accounts for only 0.6% of transport users, with minibus taxis at 45.7%, and private cars at 36%. As Rehana Moosajee, a city official who oversaw the bus project in its first six years, recently acknowledged,

The system was never meant to run like this .

The debate around subsidies for the taxi industry is all about underwriting the existing operational model of taxis. There is a separate debate about largely doing away with the minibus taxis in favour of new technology, like the bus system.

Policymakers have paid little serious attention to the operational dilemmas at the heart of providing collective transport: access, reliability, and reliance on fares for cost recovery.

For all of the time and money spent on introducing the bus system, minibus taxis still dominate. A strong operational subsidy can restructure the relationship between taxi operators and municipal governments, so that there is an integrated taxi service at the municipal level, and possibly of a single fare for multi-leg trips. This could enable further integration with other transport modes.

The case of São Paulo is a useful comparison to show how guaranteed subsidies for operational costs can be an effective incentive for centralising fare collection at the city scale. This, in turn, enables a more integrated and functional service.

In São Paulo, a system of minibus vans, known as peruas, increasingly cannibalised a patchwork of bus services during the early 1990s. This was especially so in the poor peripheries of the Brazilian mega city. The system bore a strong resemblance to the role of minibus taxis in South Africa.

This rapid growth in informal transport was a key stumbling block when the Workers Party mayoral administration of Marta Suplicy tried in 2001 to implement a “single fare” that would allow users to pay just once for a multi-leg journey . The goal was to make trips from the poorest, most distant peripheries of the city cheaper and quicker. These commuters generally had to pay at least two — and often three or four — fares to travel the far distances from their homes to work.

After tense negotiations, the city was able to convince informal perua operators to join be the new system. It did so by effectively subsidising their operations through a centralised system of fare collection that guaranteed a minimum of operational revenues .

The lesson for South Africa's current predicament should be clear.

Before the COVID-19 pandemic, the taxi sector already operated on razor sharp margins . Now, with passenger numbers dwindling , the sector's operational model is in even deeper crisis. An example of an old minibus taxis that were due to replaced by larger, safer vehicles. Jason Lawrence/Flickr , CC BY

Thus, Minister Mbalula's proposed subsidy should not be a once-off intervention. That would merely delay inevitable renewed conflict between taxi operators and government. Instead, it should form the basis for a sustained reform process to integrate taxis into municipal transport operations.

The subsidy itself can be used to incentivise taxi operators to cooperate in city-wide operational networks.

Policymakers need to look beyond fancy new technologies to replace a sector that they have long seen as undesirable. Every day, clear majorities of South Africans speak with their feet in choosing to use minibus taxis.

The role of government should be to improve and reorganise this sector to address the needs of users. The proposed national operational subsidy is an opportunity to do precisely that.