Behind the QAnon conspiracy movement are 'people looking for answers' 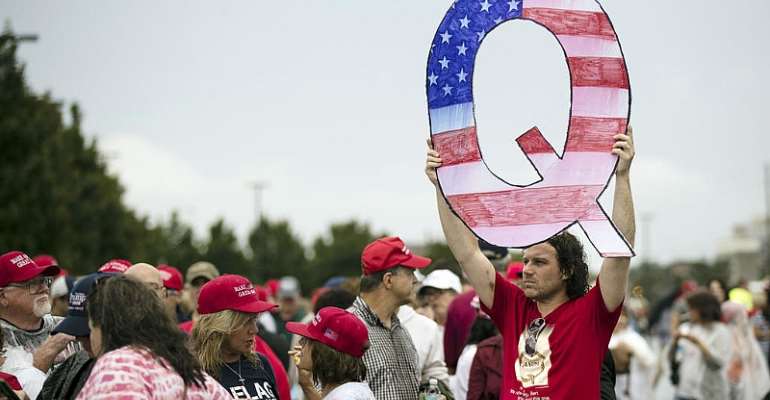 QAnon, a pro-Trump conspiracy group, has moved from the fringes of the internet into the real world and is sowing panic with misinformation about child-trafficking and the Covid-19 epidemic. QAnon continues to worry security officials as the US presidential election nears.

QAnon began as a baseless conspiracy theory in 2017, when a pseudonymous user with the handle "Q" claimed ties to US President Donald Trump.

"It is a person or a group of people who claim to be privy to top-secret information inside the American government, who began posting cryptic messages for a whole community of QAnoners," explains Rudy Reichstadt, director of French website Conspiracy Watch.

QAnon believers -- known as "anons" -- contend that Trump is waging a secret war against a deep state of Democratic elites and Hollywood stars who are paedophiles and Satan worshippers.

"The crazy thing is that you are dealing with people who think they're denouncing a manipulation when in fact they are being manipulated by someone who is anonymous. That's what QAnon is: a paradox," Reichstadt told RFI.

How has QAnon evolved?

While some might ridicule this type of conspiracy theory, such baseless rumours have had very real consequences in the past.

During the 2016 US presidential ballot, users on the anonymous 4chan messaging board -- a digital cesspool of hate speech -- linked Democrat candidate Hillary Clinton to a child-sex ring involving a pizzeria in Washington DC.

The false claim prompted one man to fire an assault rifle inside the popular restaurant. No one was hurt.

Three years on, the conspiracy theorists have broadened their appeal, particularly among women, by focusing on child trafficking; organising rallies under the hashtag “#SavetheChildren” and “Stop Child Trafficking”.

Influencers on Instagram have helped spread child trafficking misinformation by sharing QAnon narratives in innocent-looking posts, according to experts.

"The funny thing is that they're defending the only US president to have locked up children as part of efforts to tackle immigration. It just goes to show that they care little about the defence of child rights," according to Reichstadt..

What is being done to stop QAnon?

Social media companies are aware of QAnon's growing influence and have begun to take action.

This week, Facebook removed pages, groups and Instagram accounts for “representing QAnon,” which the FBI now says poses a threat to the nation, less than a month to go before the presidential election.

Mentions of QAnon in a group focused on a different subject won't necessarily lead to a ban, Facebook said. Administrators of banned groups will have their personal accounts disabled as well.

Critics called it a much-needed, though belated, move by Facebook.

"It will limit the visibility of the phenomenon. I think however we need a global conversation about conspiracy theories in general and not only this movement," reckons Reichstadt.

Although restricted to the backwaters of the internet for years, QAnon has now jumped from online to the real world with thousands of people in Germany, France, the United Kingdom and Italy all claiming to be part of the QAnon phenomenon.

The ideas espoused by QAnon have also seeped into mainstream politics. Several Republicans running for Congress this year are QAnon-friendly.

QAnon believer Marjorie Taylor Greene is set to enter Congress after she won a primary contest in August.

Even Donald Trump has at times appeared to fan conspiracy theories.

Earlier this month, researchers found that the US president was the world's biggest driver of Covid-19 misinformation during the pandemic, spreading lies about "miracle cures" and trying to downplay the true number of Covid-19 deaths in the United States.

What has been the impact?

In the political arena, Reichstadt says it cancels out any form of debate.

"How are you supposed to have an exchange with an opponent who is considered to be a paedophile or a killer? You can't. That's what QAnon does: it radicalises the debate until it becomes hysteria."

So, what is driving QAnon?

"There are several socio-economic factors driving QAnon, including political sympathy and psychology," explains Reichstadt, who is also the author of the book Opium for Fools.

The idea of belonging to a group is partly what unites conspiracy theorists, he explains.

"QAnon fulfills a narcissistic function because it gives followers the impression of being an insider, the one who has secret information that others don't have."

But there is more to it than that.
"As crazy as it sounds, conspiracy theories can actually be very reassuring, because they provide keys to a complex set of problems," says the author.

In the Manichean world of QAnon, there are only good and bad guys.

"Take for example the Covid-19 pandemic...conspiracy theorists contend that all it would take to solve the problem is to get rid of the likes of Bill Gates, George Soros and the World Health Organisation."

"In a way, QAnon gives people answers to complex problems. It tells them that all of this fuss over a pseudo-pandemic is for nothing. That we can treat it, cure it and that the disease doesn't really exist.

"Unfortunately, it completely erases the complexity of the world we're living in," Reichstadt says.