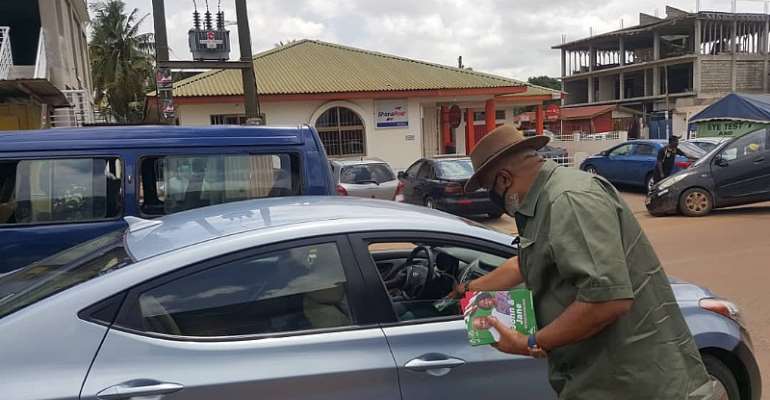 As part of efforts to clinch as many parliamentary seats as possible, the National Democratic Congress’ National Vice Chairman and the former Ambassador to Saudi Arabia, Alhaji Said Sinare have embarked on a tour in the Madina Constituency in the Greater Accra region to explain the details of the NDC's People's Manifesto to the residents.

They were welcomed by the people of Madina, Traders, and Taxi Drivers.

As a reporter eager to understand the rhetoric of a politician, I tagged along with the NDC stalwart, as he covered Madina, I noted as he sold his hunger for the coming back of the opposition National Democratic Congress to lead the country again to the promised Land.

Giving accounts on why the door to door campaigns, The National Vice Chairman of the opposition National Democratic Congress (NDC), Alhaji Said Sinare noted that, Ghana needs to be rescued from Nana Addo and the NPP so he is not going to relent until the EC chairperson declared John Dramani Mahama and the NDC as winners of the crucial 2020 election.

He has called on Ghanaians to vote for the NDC to enhance the livelihood of the citizenry.

Speaking to residents of Madina in Twi, on

“ with all humility and respect, I wanna call on you all to vote for quality development and enhanced livelihoods which only the NDC can provide because of our track records,” he said.

He proceeded by appealing to the people of Madina and the teeming youths to vote massively for their parliamentary candidate lawyer Francis-Xavier Sosu.

My people, the NDC manifesto has your own words in it so if you go to the poll and vote against your own words, you are causing more harm than good to yourself and the generation unborn, the National Vice Chairman emphasized.

If you look at your own Manifesto, Even the last person in Ghana will benefit from the next NDC Government, the NDC stalwart added.