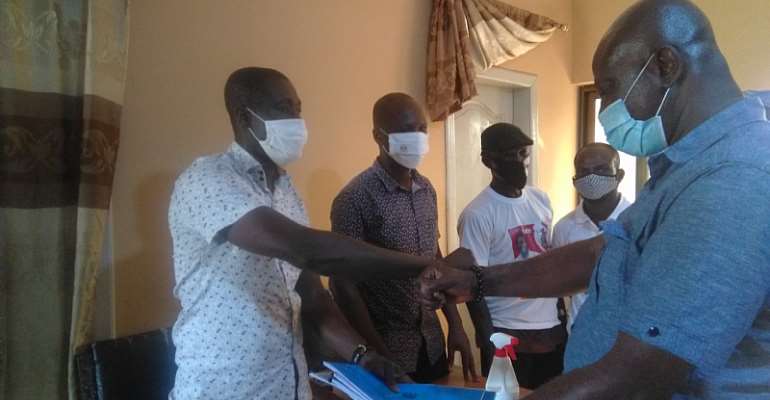 A Fifty-seven-year-old Shipping Agent, Mr. Frank Octhere Paintsil has filled his nomination forms to Contest the Gomoa Central Parliamentary seat on the ticket of the National Democratic Party (NDP) with a call on the Electoral Commission to give the smaller Politica parties fair playing fields as they prepare for the December 7, General Elections

Speaking to the Media soon after filing his nomination forms at the Gomoa Central District Electoral office last Friday, Mr. Frank Otchere Painstil noted that Electoral Commission ought to give similar attention to smaller Political Parties as the NPP and NDC

According to him, the NPP and NDC have taken a chunk of the political space in programmes and activities of the Electoral Commission against the smaller ones

"The National Democratic Party (NDP) is a third force that ought to be given similar attention to the public space. We are all contributing our quota towards national development so we should be seen as development partners

My ambition to go to Parliament is to salvage the youth from their current stages in their lives.

When you come to Gomoa Central Constituency, you could see that the youth are too deprived and we need to salvage them to another level

Apart from that, our education, health and agriculture among others are equally deprived thus bringing untold hardship to the citizenry

Gomoa Central can't be marking time, we have to move forward with our lives. In NDP, our main concern is to uplift the youth to a better career.

My Presidential Candidate, Dr. Mrs. Nana Konadu Agyeman Rawlings has taken upon herself to make sure that the youth in the deprived areas don't migrate to the urban and city centers which are already choked"

According to Mr. Frank Octhere Paintsil, the youth were speedily moving to urban and city centers because they don't have what it takes to be in their stages of lives.

" That shouldn't be the case, they should be properly engaged to give them a career be it in vocational or technical training so that they can fed for themselves and families

We have numerous youths policies in this country but it is not enough. Let us teach them how to fish but not to give them fish to Stew. We should create job opportunities for the youth to be self employed

The Central Regional Chairman of the National Democratic Party, Mr. John Kingsford Essel disclosed that the party was able to filed for two Parliamentary Candidates in Gomoa Central and Ajumako-Enyan-Essiam constituencies to contest the Parliamentary seats

Mr. Essel also expressed concern about how the Electoral Commission seems to give the bigger Political Parties the opportunities in their operations as against the smaller parties

" The Electoral Commission is mandated to build the smaller parties to be on their feet, but what do we see? Their attention is on NPP and the NDC to the disadvantage of the smaller Parties and it is unfair

The NDP is posed to offer share leadership if given the nod to form the next Government.

Led by Dr. Mrs. Nana Konadu Agyeman Rawlings, the NDP will collaborate with Chiefs and opinion leaders in the provision of a development project for every community rather than imposing projects on the people which many times become 'white elephant' because they don't need the facilities"