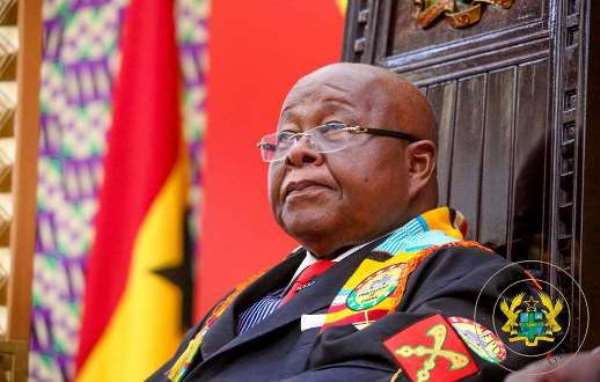 The Speaker of Parliament, Professor Aaron Mike Oquaye has summoned the Minister of Interior, Ambrose Dery before the House to answer questions on the killing of the Mfantseman legislator, Ekow Quansah Hayford.

Mr. Hayford was killed on the Abeadze Dominase–Abeadze Duadzi–Mankessim road by some unknown assailants believed to be on a robbery-spree on Friday, October 9, 2020.

The Speaker of Parliament described the incident as sad for Ghana's democracy.

He further took a swipe at critics who oppose the provision of state protection for legislators.

“I am made to feel that this is because of the person’s involvement as a member of this House but it is a very sad day and doubly sad for democracy in this country. And perhaps all those who are responsible for looking after the safety of Members of Parliament should also take note of this as far as those who sometimes criticize when protection is being demanded. It is noteworthy that the directives I gave as chairman of the board, the response from the police has coincided with this unfortunate incidence.”

“I respectfully ask that the directive that the Minister for Interior should appear in this House on Tuesday to assure the security of the members of the House and particularly with those words which apparently provoked this dastardly act,” he said.

Meanwhile, the House has called for expedited investigations into the MP’s killing.

In mourning the late MP, Parliament called on the security agencies to fast-track efforts to bring perpetrators of the dastardly crime to book.

“The Speaker and Members, while mourning the loss of their colleague, have expressed the hope for expedited action to find and bring the perpetrators of this heinous crime to book.”

Parliament described the late MP as someone who “was quiet and hard-working”.

“The late Hon. Member was a quiet, hardworking man, who did his job diligently with very little fuss.”

Akufo-Addo to launch ‘Operation Clean Your Frontage’ in Accr...
11 minutes ago