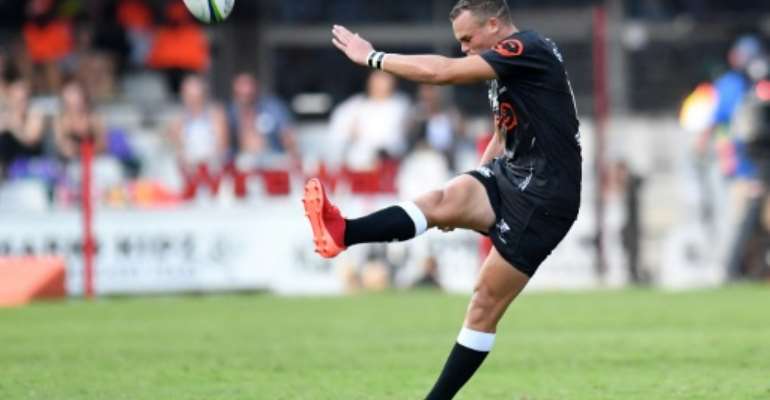 Curwin Bosch kicked 14 points for the Sharks in a South African Super Rugby Unlocked victory over the Lions in Durban Friday.. By Anesh Debiky (AFP)

The South African Super Rugby Unlocked competition kicked off in Durban Friday with a thriller in which the Sharks edged the visiting Lions 19-16 at Kings Park.

It was the first competitive match in the land of the world champion Springboks since mid March when the Sharks beat the Stormers in the five-nation version of Super Rugby.

The multi-national competition folded after the coronavirus wreaked havoc with world sport and New Zealand went it alone with a domestic Super Rugby, followed by Australia.

South Africa lagged behind because of far more Covid-19 deaths and after some pre-season warm-ups and a Springboks trial, the real deal returned Friday.

Sharks loose forward and man of the match Sikhumbuzo Notshe said: "We lost concentration in the second half and conceded too many silly penalties.

"We were repeatedly caught offside and failed to dominate the scrums, which is unacceptable because we take great pride in our set pieces.

"Next weekend we have a bye and I would rather play after being out of action for so long. Still, we can look forward to visiting the Bulls the following weekend."

While Kings Park was devoid of spectators due to pandemic-related restrictions, TV viewers were treated to a tense climax in which the Lions squandered several scoring chances.

Fly-half Elton Jantjies, the 30-year-old talisman of the Johannesburg side and understudy of Springbok playmaker Handre Pollard, hit the post with a kickable penalty on 77 minutes.

The Lions then forced a post-hooter scrum five metres from the Sharks tryline, but after two resets the visitors were penalised, giving the relieved Sharks victory.

Such a close finish had seemed unlikely 31 minutes into the opening half on a warm, dry night as the Sharks built a 13-0 advantage.

Fly-half Curwin Bosch kicked two penalties and converted a brilliant try on debut by winger Werner Kok, which flanker Phepsi Buthelezi created with a hand-off and a one-hand pass.

Starved of possession, it took the Lions 19 minutes to reach the Sharks' 22 for the first time, but a knock-on soon had them retreating.

They did get on the scoreboard after 33 minute through a Jantjies penalty, and laid siege to the Sharks tryline as the first half closed without scoring to trail 13-3 at half-time.

The Lions trimmed that 10-point deficit to just three 12 minutes into the second half when Jantjies converted from the touchline a try by winger Jamba Ulengo.

Jantjies had been the architect of the score with a pin-point cross kick from the middle of the pitch that evaded Bosch and left the giant Ulengo with a simple task.

A Bosch penalty gave the Sharks a six-point lead they surrendered as Jantjies slotted two penalties to bring the teams level at 16-16 nine minutes from time.

Another Bosch penalty proved to be the match-winner as the woodwork denied Jantjies and the Lions failed to take advantage of the late scrums.

On Saturday, the Cheetahs and Bulls are expected to win at home against the Pumas and Griquas respectively while the Springbok-stacked Stormers have a bye.

Covid-19: Hassan Ayariga under life support after ridiculing...
11 minutes ago

What evil men mean for wickedness God turns it around for go...
26 minutes ago