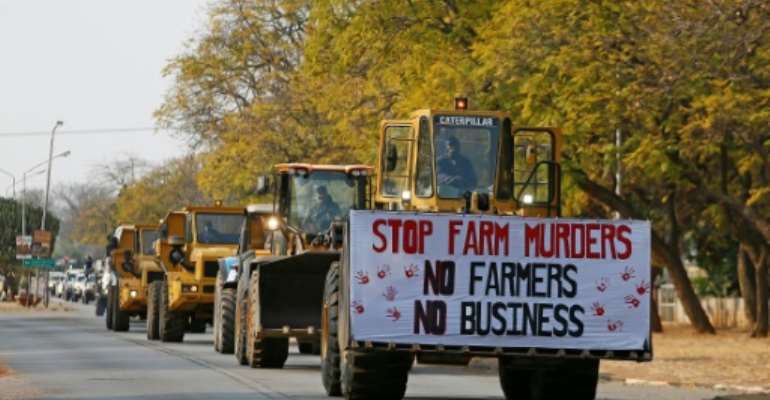 White farmers and their supporters have in recent months staged protests across the country against a spike in assaults and murders on farms.. By Phill Magakoe (AFP)

A South African farmer who allegedly led a group of protestors to storm a courthouse during a murder case hearing was charged with terrorism on Friday, prosecutors said.

Andre Pienaar, 52, was arrested on Wednesday after a group of mainly white farmers charged into a court building in the central town of Senekal during the appearance of two black suspects accused of last week's murder of a 22-year-old farm manager.

Amid a heavy police presence, Pienaar appeared for a bail hearing before a magistrate on Friday having been charged initially with inciting violence and destruction of property.

"Yes, one of the charges is terrorism," National Prosecuting Authority (NPA) provincial spokesman Pheladi Shuping confirmed to AFP in a text message.

Pienaar was arrested over a series of violent incidents that left court property damaged and a police vehicle flipped over and set alight.

White farmers and their supporters have in recent months staged protests across the country against a spike in assaults and murders.

AfriForum, a pressure group that advocates on behalf of the country's nine-percent-strong white population, told AFP Friday that 292 attacks have been recorded so far this year on farms, 38 of which were murders.