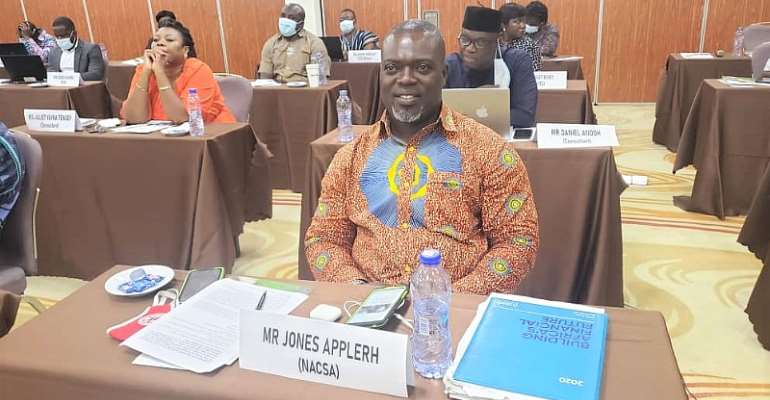 The promotion of peaceful and inclusive societies is a requisite for sustainable development, and this requires great efforts on all fronts including control over arms flows and crimes, as highlighted by the Sustainable Development Goal (SDG) 16.

However, the widespread of small arms and light weapons constitutes one of the major security challenges facing many countries particularly in Africa, which if not controlled, can inhibit the attainment of the SDGs.

To contribute to efforts to address the challenges posed by the spread of illicit arms and weapons, the National Commission on Small Arms and Light Weapons, with funding from the German Federal Foreign Office, and support from the United Nations Development Programme (UNDP), is training Civil Society Organizations (CSOs) in Ghana at a 3- day workshop in Ho. The aim is to equip and build the capacity of CSOs on emerging trends on small arms and light weapons to enhance their advocacy abilities to complement actions by state institutions to control the proliferation of small arms and light weapons.

Mr. Jones B. Applerh, Executive Secretary of the National Commission on Small Arms and Light Weapons, in his opening address at the training said, “I urge all CSOs to be up to the task to combat illicit weapons and spread of small arms before, during and after the 2020 elections. This is to ensure that Ghana continues to be a peaceful country”.

Addressing the issue of the widespread of illicit arms and light weapons indeed requires partnerships with various actors including CSOs. This is because CSOs are well placed to support relevant institutions to find and implement the needed solutions to fight against the flow of illicit arms and weapons due to their extensive knowledge of the local dynamics, trends and drivers of violence, and influence in the communities. Empowering them is critical for advocacy, monitoring and identification of early warnings of possible outbreaks of violence and conflicts.

The Deputy Resident Representative of UNDP in Ghana, in her remarks at the training, noted that, “CSOs willingness to adapt, to be innovative, versatile and more prepared to take risks in order to address their communities’ security concerns, places them in a strategic position to provide the needed support to communities in preventing the proliferation of small arms”.

Issues of artisanal arms manufacturing and trafficking especially in the West Africa region often fuel communal conflicts, create political instability and pose a threat, not only to national security, but also to the sustainable development of the African continent. For instance, a research supported by UNDP and the Government of Japan, indicated that about 1.1 million arms were being possessed illegally by civilians in Ghana, posing a threat to human security.

In addition, as of 2018, out of an estimated 1.2 million registered small firearms in Ghana, only 40,000 had their licenses renewed annually. This problem is further compounded since it is difficult to quantify the exact number of craft gun production in Ghana, mainly because this is an illicit activity which takes place in the black market.

Following emerging issues of violence in the lead-up to the country’s general elections, it has become imperative to increase advocacy to control the spread of small arms and ensure the safety of all citizens.

The CSOs training falls within activities under a regional project for the Economic Community of West African States (ECOWAS), seeking to address conflicts in an integrated and a coherent manner in Ghana, Burkina Faso & Côte d’Ivoire. Activities under the project aim to bridge knowledge and awareness gaps on the dangers of small arms and light weapons advocacy, both at high level and community levels; build capacity and develop sensitization programmes for national institutions to enable them adjust to evolving trends and situations on illicit arms and weapons.

The Regional Project Manager, Mr. Frederick Ampiah encouraged the participants to consider establishing a CSO coalition that will foster, promote and support the review of legal and regulatory frameworks to reflect current advancements in the sector. Such a coalition he said,” will relook at the role of the national commission from an advisory role to a regulatory role that is able to address the issues of small arms proliferation in the country and the sub-region as a whole”.

There are about 21 CSOs selected from across the country, benefiting from the training.