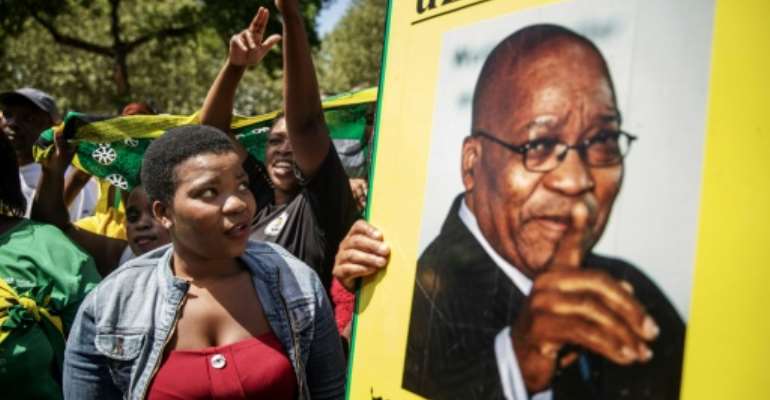 Zuma was forced to resign in 2018. By Michele Spatari (AFP/File)

A South African judicial panel on Friday ordered former president Jacob Zuma to testify next month over allegations of state corruption during his nine-year rule, forcing the embattled politician to appear in court despite his plea that the judge was biased against him.

The subpoena came just weeks after the scandal-tainted former president hit out at the commission chairman, requesting that he recuse himself as he was partisan.

Zuma, who became president in 2009, was forced to resign in February 2018 over graft scandals centred around an Indian business family, the Guptas, who won lucrative contracts with state companies and were allegedly even able to choose cabinet ministers.

Chaired by deputy chief justice Raymond Zondo, the commission was set up in 2018 to hear testimony from ministers, ex-ministers, government officials and business executives on alleged corruption under Zuma's tenure.

So far at least 34 witnesses have directly and indirectly implicated Zuma, according to the commission's advocate Paul Pretorius.

"It is important for Mr Zuma to appear before the commission as most of the corruption alleged took place when he was the country's president," Pretorius said.

Zuma has repeatedly refused to testify to the commission, most recently last month when he claimed he was too ill.

He has also cited preparation for his upcoming corruption trial as a reason for why he could not attend the proceedings.

Zondo on Friday ordered the secretary of the commission to issue a summons requiring Zuma to appear before the court from November 16 to 20.

"I am giving him an opportunity to come here and clear his name," Zondo said, adding that failure to comply was tantamount to "a criminal offence" as the commission's statutory powers are equivalent to that of a high court.

Dozens of Zuma supporters wearing military uniforms and T-shirts with Zuma's portrait chanted "Leave Zuma alone" as they picketed outside the commission's offices in Johannesburg.

They called on Zondo to recuse himself, accusing him of being anti-Zuma.

Zuma's successor President Cyril Ramaphosa has vowed to tackle corruption in South Africa, which has been led by the African National Congress since Nelson Mandela came to power in 1994 after the end of apartheid.

The commission is due to continue sitting until March 2021.

Zuma has attacked Ramaphosa for saying the ruling party was corrupt and called him a white stooge.

Ramaphosa had said in an open letter in August that the ANC, the continent's oldest liberation movement, must face the "stark reality" that it is the "accused number one" for corruption.

"I implore you to take responsibility without insulting our movement and its members, who have committed no crime of corruption as they sit waiting for the ever-elusive better life for all," said Zuma in letter that was leaked.

"You write, for your own desires to plead for white validation and approval," Zuma said.

Several ANC members are being investigated for past corruption and more recent cases of alleged wrongdoing, including involving the procurement of coronavirus supplies in Africa's worst-hit country.