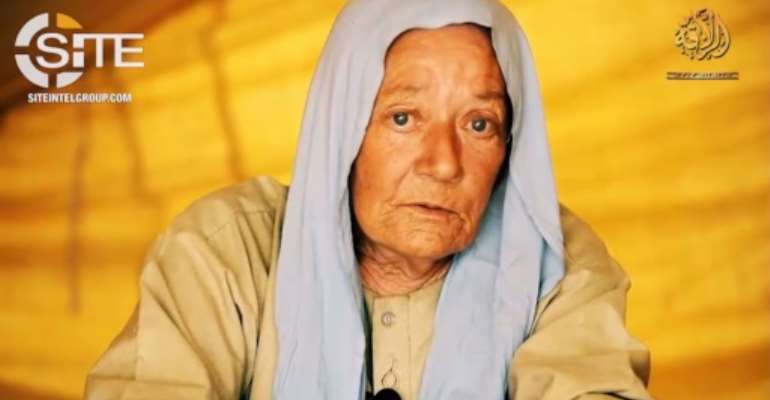 Before her kidnap, Petronin's small red car was a familiar sight in the region where she worked to help malnourished children and people called her 'mama Sophie". By - (SITE INTELLIGENCE GROUP/AFP/File)

Frenchwoman Sophie Petronin, freed in Mali on Thursday after a long kidnap ordeal, dedicated years of her life to running a charity for malnourished children in the conflict-ridden Sahel state.

"She handed out food supplies. Parents came to ask her advice. She saved hundreds of children," her nephew Lionel Granouillac told AFP

In a 2013 book, Petronin, now 75, wrote that "what I'll do in your sea of misery isn't much, but a saved life is one that's lived. Children are innocent, they have the right to grow up".

After moving to Gao, 1,200 kilometres (750 miles) northeast of capital Bamako, in 2001, her small red car became a familiar sight in the region and people began calling her "mama Sophie".

Petronin's son Sebastien Chadaud-Petronin wrote on the website of a committee formed to support her during her captivity that her vocation to help young Malians came as "a lightbulb moment" when visiting Gao.

A laboratory technician who had worked in France and Switzerland, she underwent some training in tropical medicine in 2000 before moving to Gao for good the following year, where she ran a refuge for orphans.

"She was very integrated into the local population and spoke their dialect," Granouillac added.

"She felt safe and believed in what she was doing."

Confidence in her mission did not blind Petronin to the dangers present in Mali, and she wrote in a 2016 report for her charity that "risks of kidnapping targeting Westerners remains very high", and vowing to be "doubly careful".

In 2012, northern Mali fell under the control of Al Qaeda-linked jihadists.

Petronin barely escaped in April that year from armed Islamists who had taken control of Gao.

Touareg rebels helped smuggle her into neighbouring Algeria, but she returned to Mali after spending just a few weeks back in France.

"She said things weren't easy on the ground, but that she was managing," her husband Jean-Pierre Petronin said following her kidnapping on December 24, 2016.

"It's crazy that it came to this after all she did in the last few years for the children in Gao," he added at the time. "The terrorists couldn't care less about that."

It was only in July 2017 that the Al Qaeda-linked Group to Support Islam and Muslims (GSIM), a major Sahel jihadist organisation, published a video showing Petronin among six foreigners kidnapped in Mali and Burkina Faso.

Another followed in March 2018 and the most recent before her release dated to June 2018.

In that footage, she appeared exhausted, with a gaunt face, and appealed directly to French President Emmanuel Macron.

Her family -- "very tight-knit" according to Granouillac -- had pressured Paris throughout Petronin's ordeal to secure her release.