Bolga-Bawku-Polimakrom Road To Be Ready By December — Akufo-Addo 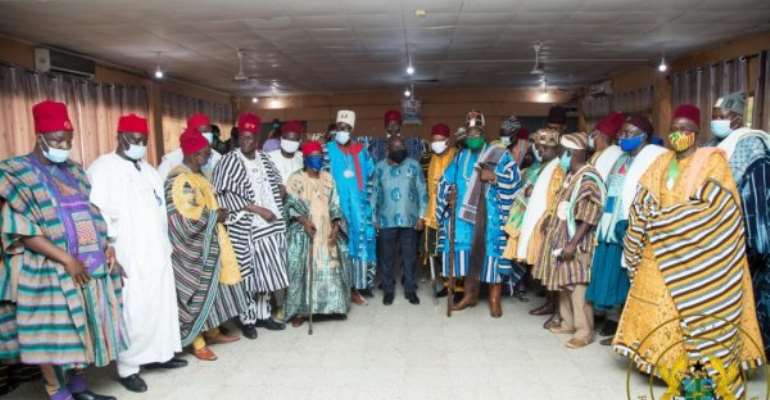 The Bolgatanga-Bawku-Polimakom road in the Upper East Region is to be completed by the end 2020, President Akufo-Addo has said.

Addressing the Upper East Regional House of Chiefs on Thursday as part of his two-day working tour of the Region, he said road which had been the subject of decades of unfulfilled promises "is now being visibly tackled, and will soon be completed.”

”Indeed, fifty kilometres of the 96.5 kilometre road has been finished in first class condition, and is now in use. The remaining 46.5 kilometre, according to the Minister for Roads and Highway, is scheduled to be completed by December,” he told the chiefs.

The President told the gathering that his administration was committed to bringing development to all parts of the country, and would make good on all its promises to the region.

He noted that the US$808 million ongoing Pwalugu Multi-Purpose Dam project in the Upper East Region, the largest investment in the entire northern sector of country since independence, would help the Region increase its generation of electricity for development and bring to a stop the perennial flooding menace that had ravaged the area for decades.

President Akufo-Addo assured the chiefs that as part of Government's Agenda 111, his administration would construct hospitals in seven underserved districts in the next twelve months.

“They are Binduri, Builsa South, Kassena Nankana West, Nabdam, Pusiga, Bolgatanga East and Tempane districts. The hospitals will have a 100-bed capacity, fully equipped, with appropriate accommodation for medical personnel, i.e. doctors and staff,” he added.

The President disclosed that so far, there were some 1,488 projects being executed in the Region by his administration, with 688 of them completed, and the remaining 800 at various stages of construction.

President Akufo-Addo said his Government would continue to support Chieftaincy to make it resilient.

He said six new office complex and bungalows would be provided the six new Regional Houses of Chiefs.

“Additionally, as I have said, we would strive to give to the institution the requisite support to resolve chieftaincy matters, and carry out research in the many areas of relevance to curb chieftaincy related conflicts,” he added.

The President reinforced the commitment of Government to ensure the peace and stability of the nation, in the run-up to the December elections.

“Ghana has rightly earned a reputation as the pacesetter in democratic governance on the continent, a reputation I am determined to uphold, and, indeed, enhance prior to, during and after the 7th December elections.

"I would need, of course, your full collaboration and co-operation to help attain this end. We have all to work together to create the environment that will allow the Ghanaian people to make their decision on 7th December in freedom, peace and security. It is their right,” he noted.