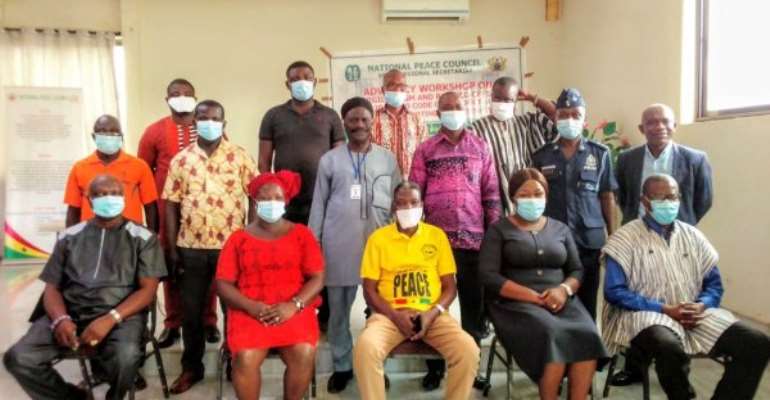 Reverend Seth K Mawutor, Chairman of the Volta Regional Peace Council (VRPC), has said an effective and efficient way of making vigilantism a thing of the past was for political parties to be sincere with themselves on the matter.

“They know where the groups are and we don't, they know if it is still there or not but, if they are honest and sincere with themselves, then they must make sure that they deal with it.”

Rev Mawutor made this known during an advocacy workshop on the eradication on vigilantism for political parties, state institutions, media and Civil Society Organisations (CSOs) and said mistrust between political parties could let them do things that would create suspicion about each other, which could make one group engage activities of vigilantes in secrecy.

He said the workshop was to enable the Council to interact with political parties and various stakeholders with regards to the 2020 general election.

The Chairman said the Peace Council was working with the parties on how best they could maintain peace and to also make sure that the vigilantism that had brought some disputes at some places could be dealt with.

“It is also to allow the parties to be aware of details of the roadmap leading to dissolving the vigilantism. It is also to let them know about the laws that are backing the formation of vigilante groups, if anyone goes against it, they will be dealt with.”

Rev Mawutor said the engagement was also to let the parties themselves come out with ideas as to how they will conduct themselves within the environment so that they could be able to conduct a peaceful election.

He expressed excitement that all political parties, especially the major ones were present adding that “at the end, we will come out with a communique.”

The Chairman urged the youth to follow ideas, be vigilant, wise, and know what to do and what not to, and not to allow themselves to be used by any politicians to cause troubles because they would be in serious problems while those who engaged their services walked freely.

Rev Mawutor called on Ghanaians to take the elections seriously and tone down emotionally and tone down things that would turn into violence to ensure a peaceful election.

Mr Andrews Teddy Ofori, Hohoe Municipal Chief Executive (MCE), said vigilantism was borne out of mere suspicions and electoral malpractices including; unprofessional conducts of electoral and police officers in the past due to lack of awareness.

He said the new electoral reforms could no longer support such activities and political parties must be aware, educate their followers and also trust the electoral commission.

The MCE commended the Peace Council for their efforts to maintain peace in the Municipality, while urging them to extend its education to secessionist activities and groups to enlighten citizens on the truth.

The workshop was sponsored by Danish International Development Agency (DANIDA) with participants drawn from the Afadzato South District, Hohoe and Kpando Municipals.

They were taken through the roadmap for the eradication of political vigilantism, code and conduct for political parties and the vigilantism and related offences act, Act 999.