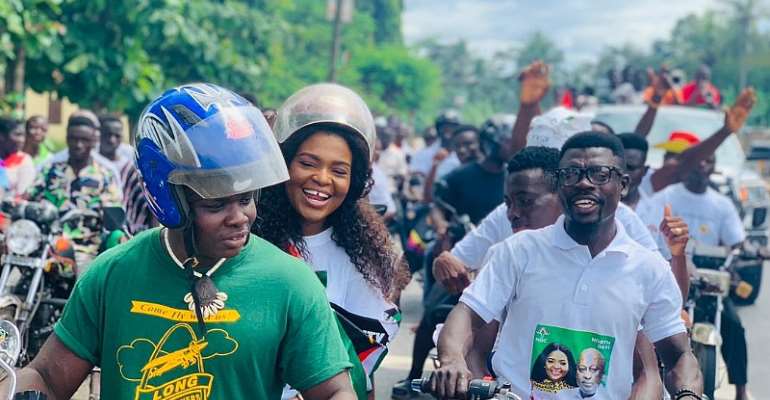 Member of Parliament for the North Dayi constituency of the Volta Region, Hon. Joycelyn Tetteh has today, Thursday, October 8, 2020 filed her nomination forms at the Electoral Commission's office in her constituency.

Hon. Joycelyn who is one of the youngest member of the Ghanaian Parliament was accompanied by an army of Okada riders and some executives who drove through some principal streets of North Dayi constituency to the EC office.

The opposition MP was visibly seen sitting behind one of the Okada riders while on her way to file her nominations.

This came a day after another opposition MP, Hon. Sam Okudzeto Ablakwa of North Tongu District, rode an Okada in an escort of many other Okada Riders to file his nomination.

This and many others, however, testify to the fact that the NDC is not leaving anything to chance in their bid to let the legalisation of Okada come to pass.

However, after the submission of her nomination forms, Hon. Joycelyn took her time to explain portions of the 'People's Manifesto' to the crowd that throng the EC's office to witness the filling process.

"The next John Mahama government will legalize Okada, he will make sure all abandoned roads are completed, increase pension payment of the aged to thirteen months and will increase maternity leave to four months for women," she stated.

She used the opportunity to call on everyone to engage in retail campaign to make sure the message of the NDC reach every home.