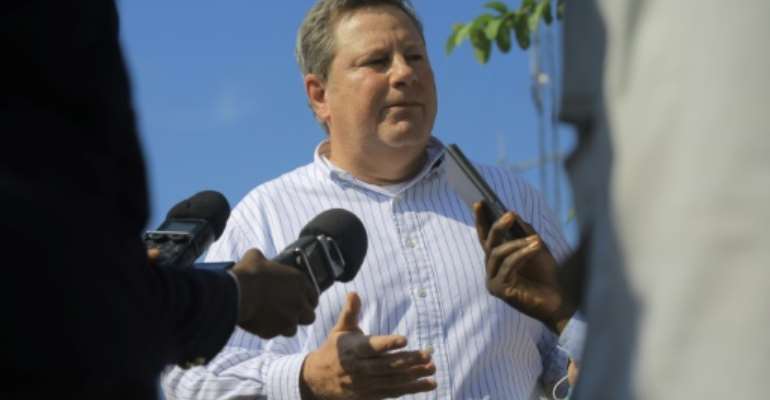 Mike Hammer, the US ambassador to Democratic Republic of Congo, is a fierce supporter of President Felix Tshisekedi. By Sebastien Kitsa Musayi (AFP/File)

Mike Hammer, the US ambassador to the Democratic Republic of Congo, is a rarity.

He is a frank commentator on the country's woes, an unusual trait among diplomats. And, in a continent where US clout has been losing ground, he is also highly influential.

In a gesture to local issues and culture, Hammer this week added the word "Amani" to his profile on Twitter, where his tweets are widely followed in Kinshasa.

It means "peace" in Swahili -- the language spoken in troubled eastern DR Congo, a vast mineral-rich country vital to the United States.

The 56-year-old envoy was touring the provinces of North and South Kivu, where armed groups are rife -- over the last year, hundreds of civilians have been massacred by the Allied Democratic Forces (ADF) militia in the Beni region.

"Hearing from the local communities, it is clear more needs to be done" to end insecurity, Hammer told AFP.

He was similarly blunt about the Congolese army, known as the FARDC, saying it "lacks capacity" in Beni and should be "ridding itself of corrupt officers".

Hammer wound up his tour in Goma, the provincial capital of North Kivu, where he had talks with President Felix Tshisekedi.

Tshisekedi "has asked the US and the international community to help bring peace and security to eastern DRC after decades of constant conflicts," Hammer said.

Hammer has been a consistent supporter of Tshisekedi.

He was named ambassador just before the presidential elections of December 2018 which put the onetime opposition figure in office, but also left him locked in a fragile coalition with predecessor Joseph Kabila.

In a trip last month to Mbandaka in northwestern DRC, where a new Ebola epidemic has broken out, Hammer was similarly outspoken.

He hit out at the "Ebola business", charging that foreign aid allocated to combat the disease —- much of it from the United States —- was being siphoned off.

Tshisekedi and his government had appealed for help to combat corruption, he said.

The ambassador says the Congolese army, known as FARDC, "lacks capacity" in fighting armed groups and should be "ridding itself of corrupt officers". By ALAIN WANDIMOYI (AFP/File)

Numbi was already under American sanctions, suspected of ordering the murder of a human rights activist in 2010 when he was inspector general of police in Kinshasa.

The speakers of the two houses of parliament, each close to Kabila, last month protested at "meddling" and "activism" by certain diplomats accredited to the DRC, but without naming names.

"When I travel throughout the country, Congolese (people) constantly ask for America's support and express appreciation for our contributions," Hammer told AFP.

"But it seems some of the old political establishment is determined to cling on to power for personal financial gain, and try to hide behind arguments of nationalism or make accusations of foreign interference."

Hammer's frankness "is courageous but it leaves him exposed" by seeming to tie him to Tshisekedi, a diplomat in Kinshasa observed. Kabila's friends hope to see the former president return to power in 2023.

Africa may have waned in importance to the Washington of President Donald Trump, who in January 2018 sparked widespread anger by reportedly making a foul-mouthed description of African nations.

But Hammer said the DRC -- a country the size of continental western Europe -- "remains an important and strategic country," stressing its potential in agriculture and hydro-electric power.

DR Congo is Hammer's first assignment in Africa, after postings in Latin America and in Scandinavia.

With a Spanish mother, he is bilingual and served as ambassador to Chile between 2014 and 2016. He previously had duties in the White House during Barack Obama's first mandate, as special assistant to the president and spokesman for the National Security Council.

Hammer said that he shared "the sorrow, the anger, the indignation" of Congolese people relating to the Black Lives Matter movement spreading around the world. By Sebastien Kitsa Musayi (AFP/File)

When Hammer was 17, his father was killed in El Salvador, where he was serving as an aid worker.

"My father was working to advance land reform and a more equitable Salvadoran society, but right-wing interests who wanted to hold on to their riches and power cut his life short," Hammer said.

When the black American George Floyd died in Minneapolis, Minnesota in May, after a white police officer knelt on his neck, Hammer said that he shared "the sorrow, the anger, the indignation" of Congolese people relating to the Black Lives Matter movement.

Hammer issued a statement protesting that the system had once again failed in protecting black American citizens, while Trump himself refused to condemn police violence.

"He's very skillful," said an observer. "He's totally loyal to his government and at the same time makes people in the DRC forget Trump."

Your independence will be respected – Akufo-Addo assures new...
15 minutes ago

He has the capacity, intellectual strength to succeed – Akuf...
20 minutes ago