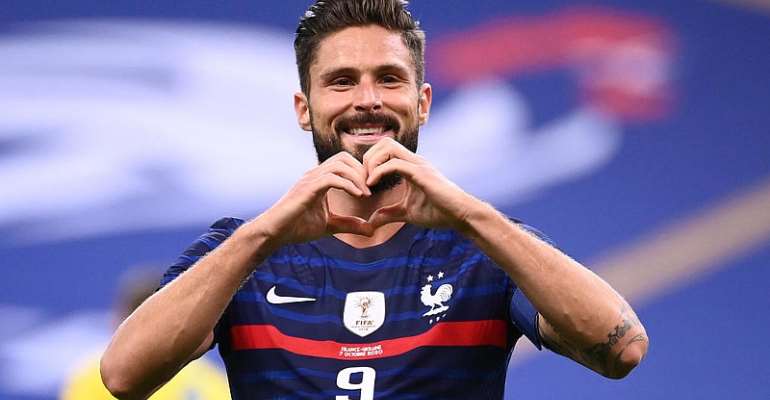 France boss Didier Deschamp hailed honorary skipper Olivier Giroud after the 34-year-old notched up the double feat of winning his 100th cap and becoming his country's second highest goalscorer during the 7-1 rout of Ukraine at the Stade de France.

After the Rennes teenager Eduardo Camavinga opened his account for France on his first start, Giroud scored the second and third goals.

Giroud's first was a sumptuous left-footed drive from outside the penalty area that curled into the top right hand corner of George Buschan's goal. That strike drew him level with Michel Platini's mark of 41 goals.

And Platini - who scored his tally in 72 games between 1976 and 1987 - was surpassed when Giroud headed home the rebound after Buschan parried Houssem Aouar's long range shot.

Rout
A Vitalia Mykolenko own goal sent the world champions in at half-time 4-0 up against Andriy Shevchenko's experimental side.

Viktor Tsigankov's strike eight minutes after the pause added some respectability to the scoreline. But that was short-lived.

Corentin Tolisso made it five in the 65th minute before substitutes Kylian Mbappé and Antoine Griezmann heaped on the misery in the closing stages.

“I'm very happy,” Deschamps told French broadcaster TF1. “I've been able to give playing time to squad members and the team has still been effective. There are lots of positives to take away.”

“Of course, you always have to have objectives,” said Giroud of Thierry Henry's record of 51 goals. “But it's too soon to think about that. If I get to 46 or 47, then maybe that will be the time to talk about such things.”