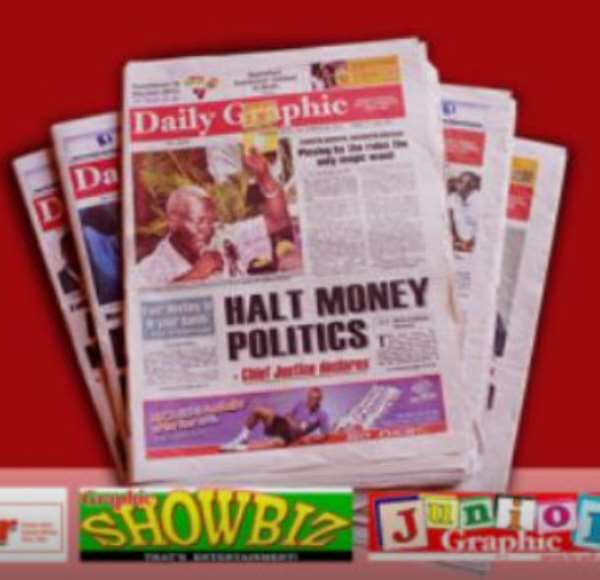 There are very few organisations which can truthfully claim that had they not existed, the history of the country in which they operate would have been different.

The Daily Graphic is one such organisation. Established a few years after the people of the Gold Coast had launched a full-scale onslaught against British colonialism, it's reporting of internal political events in the country was largely impartial, and thus enabled the people to obtain the basic facts upon which to base their political choices.

In political struggles, of course, divisions of opinion are axiomatic. And so it was that when the Daily Graphic came into existence on 2 October 1950, the incredible unity against British rule that had ushered the Gold Coast into the all-important 1948 disturbances and strikes (that explicitly told the British to scram from the Gold Coast) had only just been broken, with political tension in the country heightened to a knife’s edge.

Who was to rule the country if and when the British left, as now seemed inevitable? Would it be the remaining members of the “Big Six” (J B Danquah, Edward Akufo-Addo, Emmanuel Obetsebi-Lamptey, Ebenezer Ako Adjei and William Ofori Atta) or would it be the “newcomer” to Gold Coast politics, their former employee who had split from them in dramatic fashion, Kwame Nkrumah?

Kwame Nkrumah had returned from the United Kingdom in 1947 to become the Secretary and principal organiser of the United Gold Coast Convention (UGCC), the national front that was waging the struggle against the British. But he had pre-planned to gain control over the organisation (!) especially its youth wing, and to outflank the “bigwigs” who had invited him to become its Secretary.

Nkrumah accomplished his objective within two years, and launched his own political party, the Convention People’s Party (CPP) in June 1949.

Nkrumah then did a very clever thing: he established his own newspaper, the Evening News. Now, hitherto, newspapers in the Gold Coast had been established by well-to-do businessmen with a mixed agenda – partly political and partly business-oriented.

With the Evening News, however, Kwame Nkrumah changed all that. He devoted his entire paper to politics. As politics had gained immense ground in the country, following the 1948 upheaval, the paper became a sine qua non for the politically-awake urban reading classes.

Someone in the British Colonial Office in London at the time must have been an excellent reader of the anti-colonial mood overseas, for somehow, the Daily Mirror Group of London newspapers was “persuaded” to take an interest in pursuing profits in West Africa, by extending its operations from Nigeria (where it had bought the Daily Times in 1947 from the Nigerian concern that then owned it, to the Gold Coast. (The Daily Times had been established in Lagos as long ago, as 1925).

The head of the London Daily Mirror Group at the time was Cecil Harmsworth King, a nebulous character in British politics who was apparently connected to sections of British intelligence that was later to insidiously conspire to try and remove Harold Wilson from power (as Britain's elected Prime Minister) to replace him with a hand-picked administration headed by Lord Mountbatten, uncle of the Duke of Edinburgh! What was Cecil King's brief in West Africa in the 1950s? (He also acquired the Daily Mail of Freetown, Sierra Leone!)

Whatever the political motivation of the Mirror Group was, the business idea was unassailable. The people of the Gold Coast had developed a taste for political news, yes. But they needed facts upon which to base their choices with regard to political leadership. The Gold Coast newspapers of the time all had political or semi-political owners (as pointed out earlier). And they were old-fashioned. A newspaper that was “neutral” where Gold Coast politics were concerned, would, therefore, if it played its cards right, be a hands-down winner.

That is exactly what the Daily Graphic was able to achieve. It tried to neutralise the suspicion, in Gold Coast political circles, that it was an “imperialist instrument” by seeking out, TRAINING and paying very good salaries to young men and women who had an ambition to become excellent journalists. Many of those employed were sent on attachment courses to London with the Daily Mirror and its sister newspaper, the Sunday Pictorial.

The major achievement of these Ghanaian journalists was to absorb the art of journalism as practised by the then largest newspaper group in the world: (the Daily Mirror alone sold more than 5 million copies per day!) The Gold Coasters learnt first-class newspaper layout from the best practitioners of the techniques of tabloid display of news and features of the day in the world, introducing picture-stories as a main dish on the daily menu.

They also ran stories that contained "human interest" -- something that the staid and largely impecunious newspapers of the Gold Coast frowned upon as “sensational journalism”. Above all, the Daily Graphic(and its sister, the Sunday Mirror) awarded big by-lines to their writers, photographers and other key figures.

I remember from memory, such operatives as Francis Awuku, Oscar Tsedze, a guy called Ghansah (first name unknown to me, sorry!) another one called Quansah (I think!), Daniel Badu, Anthony Mensah, Nicholas Alando, S N Addo, Ben Dorkenoo, E W Adjaye, P. Peregrino-Peters, Ben Sackey, I K Nkrumah, Edith Wuver, Eddie Agyemang, Kofi Ahorsey, Ekow Des Bordes Acquah, George Aidoo, Isaac Eshun, Sarpong-Manu [and many others who must forgive me – especially the female writers (if any!) – for inadvertently failing to remember their names – in the time available to me!]

And, of course, the Graphic discovered and nurtured the talents of some of the all-time giants of Ghanaian journalism: Bankole Timothy, Henry Ofori (alias Carl Mutt), Moses Danquah and the founder of great sports journalism in Ghana, Kofi Badu. Key among the administrators who brought these talented people to prominence was the first editor, Martin Therson-Cofie, who was ably supported by a strong and skilful management consisting of both Ghanaians and Britons seconded from the Mirror Group.

There have been times in the story of the Graphic during which the paper has been obliged to follow the mediocre rule in Ghanaian affairs, by which everything becomes bland – when journalists have had to hide their talents for fear that if they were singled out, they would be fished out and slaughtered! This became especially noticeable after the Kwame Nkrumah Government bought the Graphic and Mirror from the London Mirror Group -- a purchase that was undoubtedly arranged as an alternative to compulsory acquisition, and which turned the paper's journalists into “semi-civil servants” overnight and obliged them to take very serious note of what the Nkrumah Government's Ministry of Information or the Publicity Secretariat wanted them to do.

Alas, that type of relationship between rulers and journalists feeling cannot be easily wiped out, even when a civilian dictatorship is replaced with a military government, or a military government with an elected democratic administration. For, as the late Prof. L.H. Ofosu-Appiah once remarked, “there are some people who are afraid of freedom!”

But it’s worth pointing out to those now practising journalism in Ghana, who are not "afraid of freedom", that they must always remember that freedom is never granted, but always fought for and wrested from those who seek to deny it to journalists and other leaders of thought in a society.

Fortunately, some of the yellowing pages of the “ancient” copies of the Daily Graphic do exist to inspire those who can be inspired, to do everything in their power always to tell their fellow countrymen and women what is really going on in their country.

That is what the reader who puts his hand into his pocket to fish out money to buy a newspaper, really wants. Journalists ignore that wish at their peril. For when newspapers – no matter who owns them – become the mere bulletins and mouthpieces of political and commercial interests or the instruments of loudmouths who cannot stitch an argument together without hurling insults to others or yelling at them, readers desert the newspapers.

And once trust in the good faith of a newspaper is lost, it can hardly ever be restored – at least, not under the same leadership as existed when the trust was first forfeited.