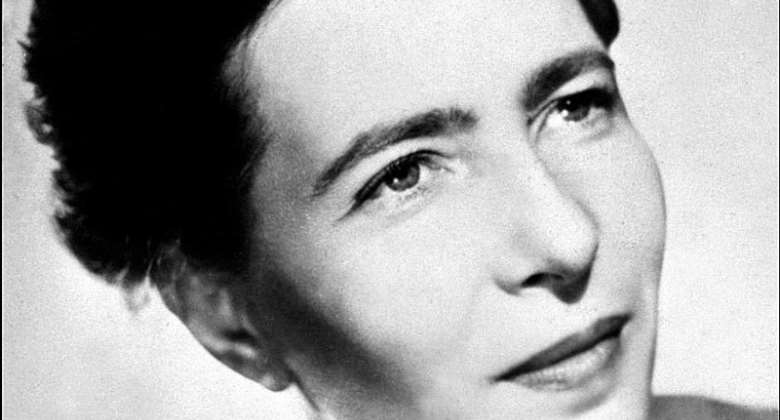 "Les Inséparables", a tragic love story that Simone de Beauvoir believed was "too intimate" to publish during her lifetime, reveals how a passionate relationship with her classmate "Zaza" helped set the existential philosopher on the road to emancipation.

In Les Inséparables the renowned French writer and feminist tells of the intense, passionate friendship she had with her classmate Elizabeth “Zaza” Lacoin in the 1920s.

The girls met at school aged nine, and became inseparable. But the friendship was tragically cut short when Lacoin died of encephalitis aged 21.

"From the day I met you," writes Beauvoir, "you were everything for me."

In the 176-page novel, Beauvoir takes on the name of Sylvie while Lacoin is Andrée.

Sylvie Le Bon Beauvoir, the writer's literary confidante and who holds the rights to her estate, said "Zaza was crucially important for Beauvoir […] the relationship lit up her youth”.

But while Beauvoir was in love with Zaza, they weren't necessarily lovers.

“On Simone de Beauvoir's side it was much more intense than on Zaza's side,” she said. “She was devoted to Zaza, she admired her hugely, but that doesn't mean her love for her was sexual.”

Rejecting the Catholic bourgeoisie
Both Beauvoir and Lacoin were born into traditional, Catholic families. They dreamt of being more independent and having a higher education at a time when women were meant to be chaste, devout and obedient.

Beauvoir had already referred to her friendship with Zaza in her 1958 work of non-fiction Memoirs of a Dutiful Daughter in which the more rebellious Zaza spurred on her friend.

“It was only when I compared myself with Zaza that I bitterly deplored my banality” Beauvoir wrote.

Both books tell of how Zaza gave up her studies, and entered into a relationship with philosopher Maurice Merleau-Ponty, under pressure from her family.

Beauvoir meanwhile was allowed to continue into higher education.

“The contact she had with Zaza's milieu opened up her eyes to the Catholic bourgeoisie which, as she said herself, had assassinated Zaza.

“Zaza's tragic death, when Beauvoir was 22, had a profound and overwhelming impact on her.”

But Zaza played an insignificant role in forging Beauvoir the feminist.

“Zaza made her happy in her youth but she didn't evolve intellectually with her,” said Le Bon de Beauvoir. “She couldn't. Beauvoir lost her faith aged 14 and didn't dare talk to Zaza about that because her friend was extremely religious. Beauvoir developed her intellectual life outside Zaza's circle.”

Published after 66 years
Beauvoir became famous through her political and philosophical writings, notably the ground-breaking feminist treatise “The Second Sex” (1949) on the treatment of women through history.

But she did write several works of fiction including novels “She Came to Stay” and “The Mandarins”.

She began writing “Les Inséparables” in 1954 but put it to one side and never published it.

Some say she was put off by the negative reaction of Jean-Paul Sartre, her partner for much of her life, and who vetted her work as she did is.

In her memoir she wrote that the story “seemed to have no inner necessity and failed to hold the reader's interest”.

“Beauvoir was hesitating between fiction and autobiography at the time," she said.

"She had just finished a big novel, The Mandarins, in 1954, and wanted to write about herself, but she had reservations about attacking an autobiography head on so she opted to tell Zaza's story.

"It shows the extent to which their two stories were intertwined."

If Sartre was less than impressed it's because “he knew she had wanted to write an autobiography and found it unsatisfactory because its centerpiece was Zaza, not Beauvoir”.

What's more there are other examples of works Beauvoir had left on the back burner, such as “When Things of the Spirit Come First”.

“She was very critical of it, but then published it 30 years later. It's a similar situation with “Les Inséparables”.

“She told me that while she didn't plan on publishing this novel herself, she could imagine it would be published later because it had value," Le Bon de Beauvoir explained.

"It was a way of getting justice for Zaza, to bring Zaza back to life. Because basically the tragedy of Zaza's death remains something of a mystery.”

In the preface to the book Le Bon de Beauvoir argued that the existentialist writer found "the final fictional transcription unsatisfying".

But would have approved of its publication, 66 years later.

“She destroyed some works she was not happy with, but didn't destroy this one,” Le Bon de Beauvoir said confidently. “When writers hang on to their work, there's a reason.”

"Les Inséparables" is published by Editions L'Herne, the English version will be published as “The Inseparables” by Vintage in the UK and Ecco in North America in late 2021.