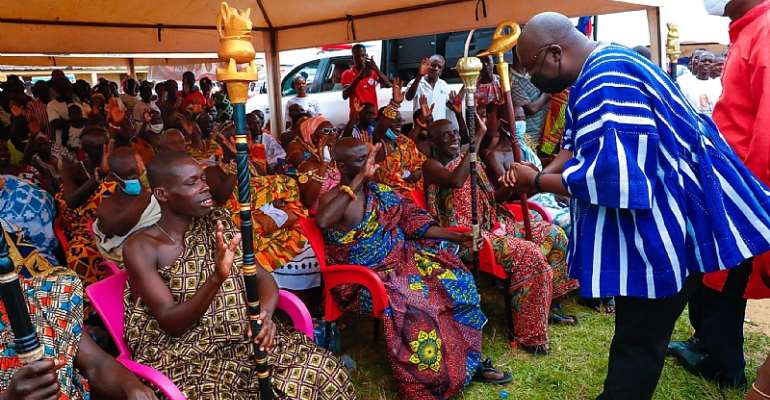 The Chief of Wassa Atobiase, Nana Opia II, says government of Nana Akufo-Addo has performed tremendously well in its first term of office and deserves commendation.

Addressing a durbar of Chiefs at Wassa Atobiase during the visit of Vice President Bawumia on Wednesday October 7, 2020 the Chief said evidence of President Akufo-Addo’s good performance in government abounds and he is not the only one who has seen it.

"Frankly, the government of President Akufo-Addo has performed so well and their good works are there for all to see," Nana Opia II said.

"I am not the only one who has seen it because evidence of the good works of his government are all over the country."

"This is historic. I have never seen this in my life, and I believe our elders also never saw this in their time. This is the first time this is happening in our country where every child can access secondary education for free. Everybody is benefitting and the children of Atobiase and surrounding towns are also benefitting."

"We all saw how the Corona virus devasted many countries around the world and we have seen how it has been managed here in our country.

"President Akufo-Addo and his government have done so well with the way they have managed the Corona virus."

Touching on the Akufo-Addo government's inclusive development policies, Nana Opia said his community has received its share of development.

"Our school used to face serious challenges of congestion. But as I speak to you now, we have a new school block which is almost done. Now we are going to have A, B, and C classrooms for each level.

While commending the government for its good works and the development in his community, the Chief appealed to the government to consider giving them more projects.

The Chief also appealed for government to consider upgrading their roads.

Vice President Bawumia, who is on a two-day tour of the Western Region, thanked the Chief for acknowledging government’s efforts and assured him that the request for a secondary school will receive consideration.