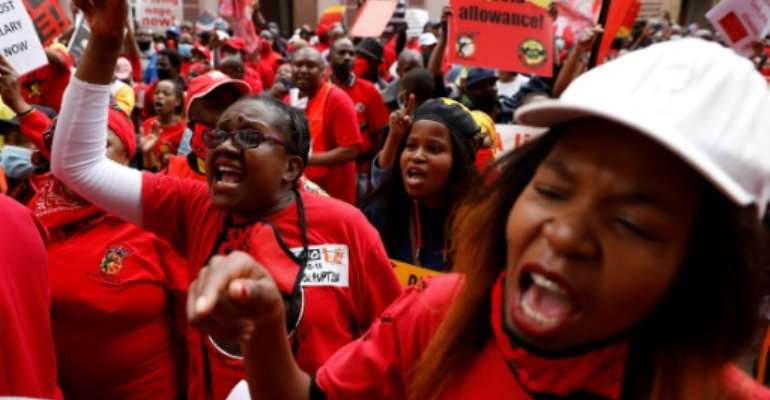 Thousands of South African workers took to the streets Wednesday to denounce rampant corruption, low wages and the loss of more than two million jobs during the second quarter of this year.

"We are highlighting the issue of corruption, both in the public and private sectors," COSATU President Zingiswa Losi told AFP, noting that South Africa was struggling "way before Covid-19".

"Corruption is the cancer that is killing and eroding the fibre of our society," she added. "When workers get retrenched they go back home with nothing."

More than 2.2 million people lost their jobs between April and June this year, according to official statistics released last month.

Hundreds marched under a grey sky in the administrative capital Pretoria, singing and chanting as they walked through the city centre to deliver a memorandum to the employment minister.

Clad in red COSATU T-shirts and caps, protesters held signs saying "A Living Wage Now" and "No To Covid-19 Corruption".

Priscilla Mashabane, 34, who works for an embroidery company said she was striking for better wages.

"You would be ashamed if I told you how little I earn... it's very painful," she told AFP.

"There is a lot of corruption," Ragedi exclaimed, adding that graft had become "more than worse" since the pandemic started.

A spate of coronavirus-linked graft scandals have surfaced in recent weeks, sparking outrage among a population blighted by the economic setbacks of strict lockdown measures.

Government investigators are currently probing more than 600 companies and institutions awarded over $300 million in contracts to supply protective equipment for health workers and distribute relief aid.

COSATU, which says it has more than one million members, has distanced itself from the ruling African National Congress party over its handling of the pandemic.

South Africa has been particularly hard-hit by coronavirus compared to the rest of the continent, with over 683,000 cases and 17,100 deaths recorded to date.