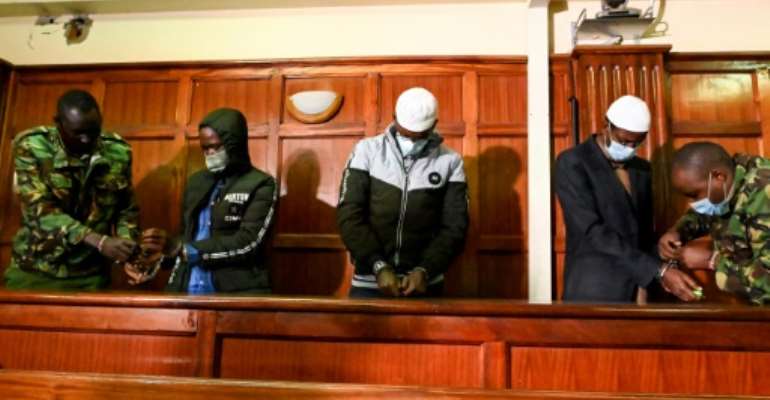 A Kenyan court found two men guilty on Wednesday for their part in aiding Al-Shabaab gunmen who attacked the Westgate mall in Nairobi in 2013, killing 67 people.

After a trial that began in January 2014, Magistrate Francis Andayi found that Mohamed Ahmed Abdi and Hassan Hussein Mustafa conspired with and assisted the four attackers, who died in a siege claimed by the Somalia-based Al-Qaeda-aligned group.

The third accused, Liban Abdullahi Omar, was acquitted of all charges and immediately allowed to leave the dock.

It was unclear whether the magistrate would hand down sentences immediately or at a later hearing.

The convicted pair "had constant communication with the attackers," the pattern of which "betrays the fact that they may have been just friends," said Andayi.

Although there was no specific evidence that they had provided material help, the judge said he was satisfied "their communication with the attackers was giving support to their endeavours" and justified the guilty verdict for conspiracy.

At midday on September 21, 2013, a four-man commanded team raided the upscale Westgate shopping mall in the Kenyan capital, throwing grenades and firing indiscriminately on shoppers and business owners.

Flashback: CCTV image of a gunman at the besieged shopping mall. By - (WESTGATE MALL/AFP/File)

A four-day siege ensued during which Kenyan security forces launched a series of assaults to retake the mall and subdue the attackers.

The attack was claimed by Al-Shabaab in retaliation for Kenya's military intervention in southern Somalia in 2011.

Kenyan troops are part of the African Union Mission to Somalia (AMISOM), which helped drive Al-Shabaab from key strongholds in the war-torn nation.

Six die in accident at Hemang after car crashed into wrongly...
56 minutes ago