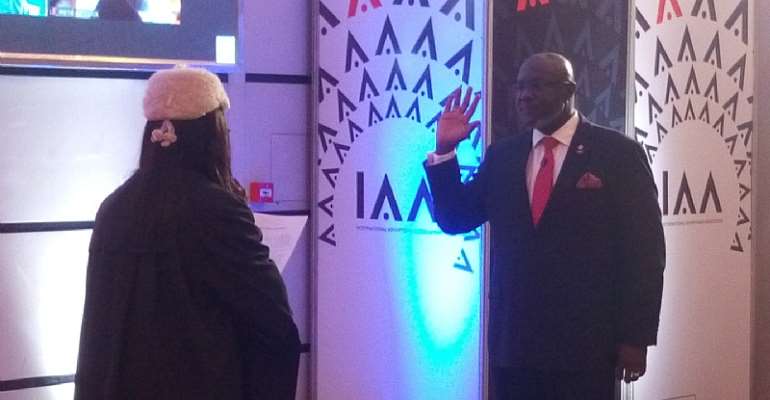 Mr. Joel Edmund Nettey being sworn in as President and Chairman of IAA by Her Ladyship Justice Olivia Obeng

Renowned marketing communications expert, Mr. Joel Edmund Nettey has been sworn in as the new president and chairman of the International Advertising Association (IAA) at a beautiful ceremony in Accra, Ghana.

The immediate past President of the Advertising Association of Ghana was earlier this month approved by the board of the umbrella organization to be inducted as its new head.

At a ceremony at the Labadi Beach Hotel in Accra on Tuesday morning connected to top executives and board members via Zoom across the world, Mr. Joel Edmund Nettey was sworn in by Her Ladyship Justice Olivia Obeng to serve as the new President and Chairman of the IAA for the next two years.

In his address after his induction, Mr. Joel Edmund Nettey who served as a Senior Vice President in the immediate past administration revealed plans to improve on the image of the IAA while increasing its relevance and impartibility.

“Permit me to share with you the 3 key things I propose should guide everything we do in the medium to long-term and definitely the next two years. It is what I have termed our RRI approach; Making the IAA more recognizable, more relevant, and more impartible”, he told the gathering and all executives that joined the ceremony via Zoom.

Mr. Joel Edmund Nettey further stressed, “At the end of my tenure I’m hoping that with your support we will be able to improve on the image of the IAA as the International Association that it is supposed to be and to be the true global compass or marketing communications across the world”.

While paying tribute to all past executives who have contributed to making the International Advertising association what it is today, Mr. Joel Edmund Nettey also called on all members of the global organization to join him to take the IAA to the next level.

The new president has set his sight on imbibing diversity and inclusion as one of the values of the IAA and has also opened up embarking on initiatives to increase revenue to make the IAA more financially sound than it is currently.

In the immediacy, Mr. Joel Edmund Nettey is seeking approval from the board of the IAA to declare the 3rd of October as World Communications Day and says he is keen on seeing the United Nations (UN) approve the date on its calendar.

Meanwhile, Mrs. Norkor Duah, the Area Director for the IAA for Africa, has pledged continuous support for him as the first African to serve as the president and chairman of the IAA.