How religion inspires the Nigerian diaspora to develop Africa

By Edward Ademolu - The Conversation 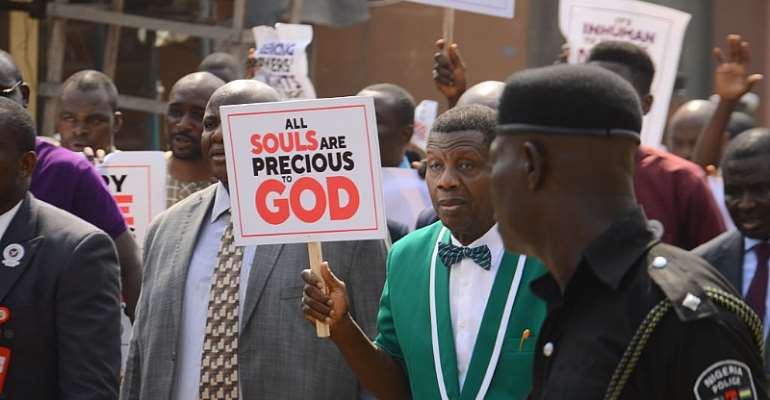 The General Overseer of the Redeemed Christian Church of God, Enoch Adeboye, holding a placard, leading a protest in Lagos. - Source: Olukayode Jaiyeola/NurPhoto/Getty

In many ways, it's challenging to define international development. What angle would you prioritise when you consider something so broad? Macroeconomics? Structural adjustment programmes? International trade policy? Or is it poverty reduction? All these are valid.

But no definition would be complete without considering it from the viewpoint of so called 'developed' and 'underdeveloped' nations. Despite multiple interpretations, the broader understanding of faith and religion in development are barely understood. Especially for African diaspora communities engaged in development work.

Religion has often been a key motivation for philanthropy and economic fairness. Sometimes, it's the Quranic requirement of alms-giving (Zakat). It can also take form as the Holy Bible-inspired Jubilee 2000 campaign advocating for the annulment of unjust debt for developing countries.

Until recently, faith was dismissed by academia and key international development players. This is due to the belief that the nature of religion comprises intolerant evangelism and regressive visions of the future.

This fundamentally makes it opposed to the material nature of economic progress. And that as societies modernise, religion will remain a private affair .

However, these doubts around religion have been critiqued and debunked by various academic disciplines . The significance of religion for development is widely recognised. Even though its role is complex and controversial .

Right now, religion is enjoying its new-found importance in development agendas. But there's very little consideration given to how African diaspora communities engage in development through a religious filter.

For my research , I explored this gap in knowledge. I asked a few questions. Are religious and faith identifications significant? Is there space for new faith-based interpretations of international development?

As a case study, I interviewed first and second generation London-based Christian and Muslim Nigerians. In doing that, I discovered that religious identities and 'narratives of faith' all play a role. They are important in understanding how these diaspora communities engage in international development.

The African diaspora approach to development can be understood by studying their motivations. Developmental work for them is often grounded in religious and moral assessments and obligations.

Their contributions are largely in the form of private cash remittances to the continent. Group non-monetary donations and services to Nigeria are also made via their places of worship.

My relationship with religion came from my family. I am a product of an interdenominational Christian marriage. My expatriate father was raised in Anglicanism via the Church Of Nigeria. My mother was born in the United Kingdom and partly Nigerian-raised. She was Roman Catholic.

Her father was an Oba (traditional ruler), who subscribed to the indigenous spiritualism and practices of Ifa, a Yoruba religion. Her grandfather, in contrast, was conferred Knight of the Papal Order of Sylvester by the Pope.

Growing up as a British Nigerian, I spent my formative years attending disproportionately white Anglican and Catholic churches. I later started travelling around numerous UK-based Nigerian and Black Majority Churches during adolescence and young adulthood. Members of the Eternal Sacred Order of the Cherubim and Seraphim Church choir march through Walworth as part of their annual Thanksgiving service on July 28, 2013 in London, England. Dan Kitwood/Getty

Within this system, I discovered that getting spiritually closer to God was a currency that was routinely traded. However, I also saw charitable parishioners make personal sacrifices and contributions via the church, allied community and faith-based organisations.

These contributions were gathered and used to launch and support philanthropic poverty alleviation missions in Africa. Muslims in Nigeria offer Eid al-Fitr prayers marking the end of the Muslim holy month of Ramadan at a ground in Ogun State. Olukayode Jaiyeola/NurPhoto/Getty Images

I also observed that traditions of transnational 'giving' among predominantly Nigerian congregations were incorporated as part of service. They were also encouraged as symbolic expressions of faith.

Other avenues include voluntary church offerings, or shipping of second-hand apparel and toiletries to Nigerian orphanages and young women's refuges. Religion has often played its part.

How did the philanthropic leanings of religion infiltrate the secular walls of international development?

For Nigerians, Christian and Muslim identities provide the blueprint through which they engage in international development.

Their expressions of development are organised around spiritually romanticised discourses of humanitarianism, stewardship, compassion, reconciliation and justice.

Nigerians in the diaspora frame their development activities as consecrated acts. Many others see it as 'outward signs of an inward grace'. These acts are carried out within systems constituted by moral expectations, family and cultural obligations.

According to some participants, this also characterises their 'Nigerianness' or 'Africanness'.

Within this frame, development is understood by Nigerians in two ways. It's first seen as a practical performance of their faith. And also as actions that represent their religious identities.

Certainly, these communities conceive religion and their religious selves as development itself.

We need to redraft international development to accommodate faith. The revised version needs to accommodate Afro-religious performances of transnational giving.

Edward Ademolu does not work for, consult, own shares in or receive funding from any company or organization that would benefit from this article, and has disclosed no relevant affiliations beyond their academic appointment.