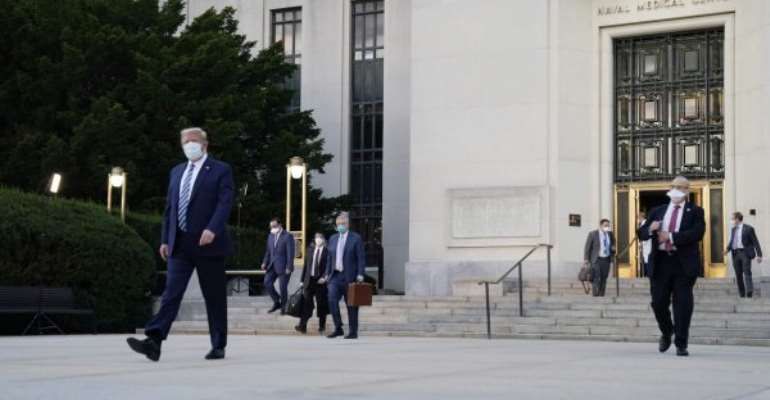 US President Donald Trump on Monday returned to the White House after a three-day stay at a hospital where he was treated for the coronavirus, saying on Twitter he was "feeling really good.

Trump, wearing a mask, was taken by helicopter from the Walter Reed medical centre outside Washington.

Video footage showed him climbing the steps to the South Portico balcony, where he took off his mask and stood saluting for several moments before entering the building.

Earlier, he had pumped his fist and given a thumbs-up as he emerged from the hospital's gilded doors, without speaking to reporters.

"Feeling really good! Don't be afraid of Covid. Don't let it dominate your life ... I feel better than I did 20 years ago!" the president tweeted as he announced he was being discharged.

In a later video message on Twitter, Trump said that as a leader he had to return to work and be "out front," and appeared to make efforts to justify holding large gatherings just hours before his infection was announced.

He also suggested he may now be immune, despite there being no clear-cut evidence that having Covid-19 once leaves patients with long-term immunity. Nor have Trump's doctors said he is fully recovered from the virus. He will continue to receive treatment at the White House.

"Nobody that's a leader would not do what I did. And I know there's a risk, there's a danger but that's ok and now I'm better, maybe I'm immune, I don't know?" Trump said in the video.

Official guidance from US health authorities suggest people who test positive for Covid-19 should self-isolate for at least 10 days from when their symptoms appeared. Trump tested positive on Thursday.

The president has often appeared in public without a mask in recent months and has come under fire for downplaying the pandemic, which has infected over 7.4 million people and led to more than 210,000 deaths in the United States.

"He may not be entirely out of the woods yet," Trump's physician, Sean Conley, told reporters earlier on Monday. "But the team and I agree that all of our evaluations, and most importantly his clinical status, support the president's safe return home, where he'll be surrounded by world class medical care."

Trump tweeted throughout the day, including about the November 3 election. His illness has thrown the campaign into a tailspin.

"Will be back on the Campaign Trail soon!!!" he vowed before leaving the hospital.

Meanwhile, White House Press Secretary Kayleigh McEnany said she had tested positive for the coronavirus, becoming the latest in a growing cluster of people around Trump to be infected. Two of her deputies were also infected, according to the New York Times.

"I will begin the quarantine process and will continue working on behalf of the American people remotely," McEnany said in a statement posted on Twitter.

She said she was not experiencing any symptoms and that no journalists were considered close contacts.

McEnany has been criticized in recent days for briefing reporters at the White House without wearing a face mask.

"I am feeling good & will continue to rest at home," the first lady tweeted on Monday.

Democratic presidential nominee Joe Biden, who resumed in-person campaigning on Monday, urged Trump to "listen to the scientists" as the president returned home.

Biden, who has tested negative for the coronavirus repeatedly in recent days, said he would participate in the second presidential debate with Trump, scheduled for October 15, if health experts deemed it appropriate.

During their update on the president's health on Monday, doctors said it had been 72 hours since the president last had a fever and that his oxygen levels were normal.

Trump, 74, was to receive a fourth dose of remdesivir, an antiviral drug, before leaving the hospital, and a fifth and final dose on Tuesday evening in the White House, they said.

Doctors have said the president's oxygen levels dropped twice and he received supplemental oxygen at least once. He had a fever, but the temperature was not disclosed.

Trump was also on a steroid and has received an antibody cocktail.

At times, the medical team has seemed to paint an overly rosy picture, creating confusion, particularly as it has been combined with the White House's refusal to get into some details.

Trump has also been criticized for endangering those around him by briefly leaving the hospital on Sunday to be driven around in a black government vehicle in front of supporters gathered outside.

The White House said the drive was approved by the medical team "as safe to do."