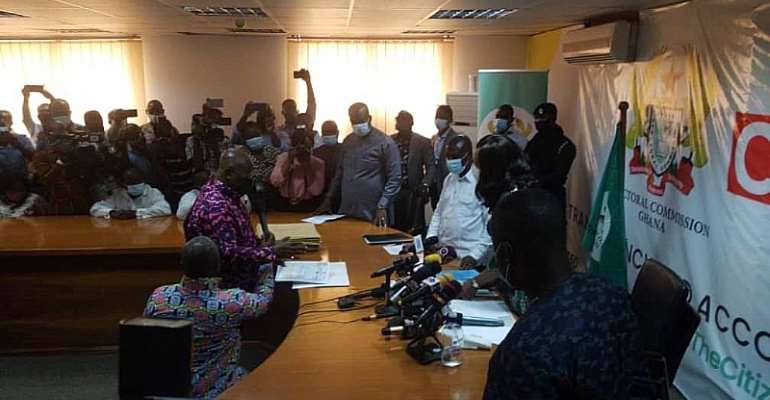 President Nana Akufo-Addo has directly told the Chairperson of the Electoral Commission, Mrs Jean Mensa, that she is not the one to determine the winner of the 2020 polls but the people of Ghana.

The President, thus, urged Mrs Mensa and her other colleagues at the EC to ensure fairness in the elections.

While filing his nomination on Tuesday, 6 October 2020, the President said: “I’ll like also to make a few remarks: First of all, I want to thank you very much for the expeditious process that I’ve been subjected to today.

“My running mate and I represent a party that, from its very inception in 1947, has been committed to democratic governance.

“We’ve been unwavering in our attachment to democratic values and principles.

“So, for us, the Ghana of today, the multiparty, open democratic system is a matter that responds to our deepest convictions and values”, he said.

“The step that is being taken today is a necessary incident in democratic governance”, the President noted.

He told Mrs Mensa that: “We are counting on you to be the arbiter and to hold the scales evenly to all contestants.

The President told Mrs Mensa emphatically that: “Elections are not meant to be decided by you or the officials that work for you”.

“You are the referees of the contest”.

“The election is supposed to be decided by the people of Ghana and we are hoping that the arrangements that you have put in place will enable the Ghanaian people to manifest their will on the 7th of December and choose the next government of the fourth republic”, he noted.

The President also observed that the EC has done a good job so far.

“So far, the work that you have done has given considerable confidence to the majority of people in our country that in you and in the leadership of the Electoral Commission, we have people who are committed to a free, fair, credible and transparent process.

“We hope that that will mark the conduct of the elections of 7th December”, he added.

The President further mentioned that: ‘I am not in interested in any crooked results”.

“I do not want to be a president elected by deceit.

“I look forward to a contest that will be fairly conducted, so that if, indeed, by the will of the Almighty, I am, again, the choice of the Ghanaian people, it will be one that has been freely and openly demonstrated.

“I want to thank you very much for the opportunity this morning and what we all pray for is that may the best man win”, the President added.