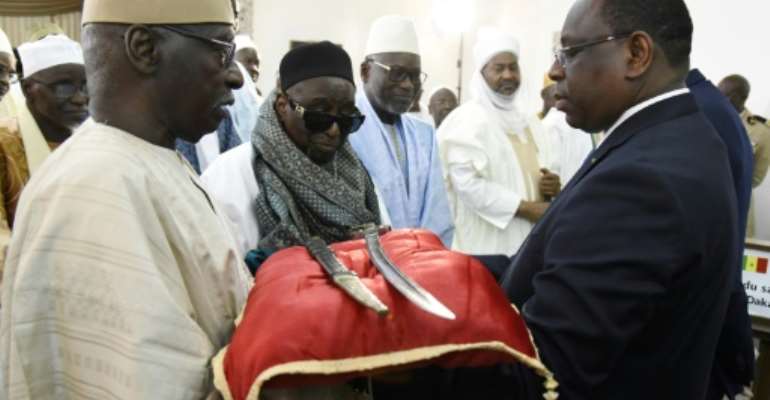 A sword and scabbard said to have belonged to Omar Saidou Tall, an important 19th-century military and religious figure in West Africa, are officially held by the Army Museum in Paris but are on long-term loan to Dakar. By SEYLLOU (AFP/File)

French lawmakers are to vote Tuesday on returning prized artefacts to Benin and Senegal more than a century after they were looted by colonial forces and hauled back to Paris to be displayed in museums.

The pieces include a royal throne and statues taken by the French army during a war in Benin -- then the wealthy African kingdom of Dahomey -- as well a sabre once wielded by a 19th-century Muslim sheik in what is today Senegal.

"It is not an act of repentance or reparation, nor a condemnation of the French cultural model," Culture Minister Roselyne Bachelot insisted ahead of the vote in the National Assembly, the lower house of parliament.

Instead, returning the artefacts should open "a new chapter of cultural ties between France and Africa," she said.

If approved, France would officially restore to Benin 26 items from the so-called Treasure of Behanzin, looted during the 1892 pillaging of the palace of Abomey in Dahomey.

They include the throne of King Glele -- a centrepiece of the 70,000-odd African objects held at the Quai Branly-Jacques Chirac museum in Paris.

Senegal will get back a sword and scabbard said to have belonged to Omar Saidou Tall, an important military and religious figure in West Africa in the 19th century who lived from 1797 to 1864.

The pieces are officially held by the Army Museum in Paris, but are on long-term loan to Dakar, where they have been exhibited since last November.

Senegal has also sought the return of a prayer rug, a baton and a copy of the Koran that belonged to Omar Tall, who fought French troops from 1857-59 before signing a peace treaty in 1860.

President Emmanuel Macron pledged shortly after his election in May 2017 to look into the restitution of African cultural treasures.

But the project has its detractors, including some who fear diplomatic incidents and warn that France could end up losing its rich collection of artefacts from around the world.

Others say the bill does not go far enough.

They include Benin's President Patrice Talon, who told the magazine Jeune Afrique (Young Africa) that he was "not satisfied" even while welcoming "small steps" being taken by France.

"To approve a specific law to hand back 26 artefacts is strictly the minimum. What we want is a general law" that would allow for "global restitution based on a precise inventory", he told the magazine.

Bachelot, the culture minister, said France has already returned artefacts as part of "a growing international movement" and a new "reflection on the role of museums in the world".

These include items returned to Laos; a stolen statue to Egypt; 21 Maori heads to New Zealand; and 32 gold plates to China.

But last month, five activists went on trial in Paris for trying to seize an African funeral staff from the Quai Branly, France's pre-eminent indigenous art museum, in a bid to put new pressure on Macron to return more items.

An expert report commissioned by Macron in 2018 counted some 90,000 African works in French museums, most of them at the Quai Branly.

The report had suggested a "circulation" of some works among museums rather than an outright return, saying not all were pillaged or stolen.

Britain has also faced calls to return artefacts, notably the Elgin Marbles to Greece and the Benin Bronzes to Nigeria, while museums in Belgium and Austria house tens of thousands of African pieces.