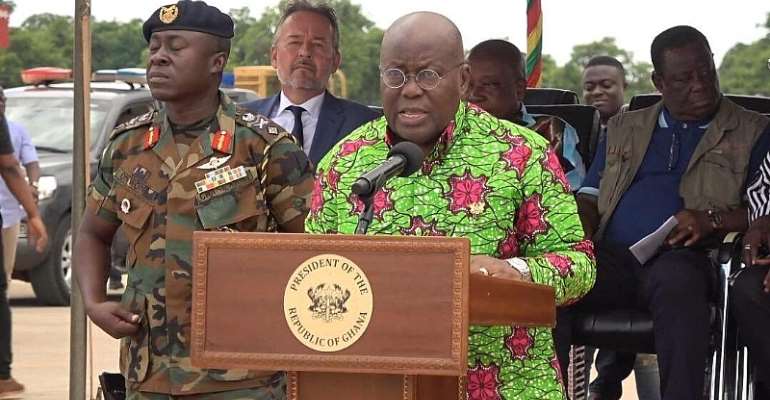 President Akufo-Addo, has ended his three-day working tour of the Eastern Region with an appeal to Ghanaians to renew his mandate to do more, on December 7.

The President at separate functions that formed part of his tour, stated that he had been truthful to Ghanaians and had delivered over 80 percent of the promises made in 2016, therefore, needed another endorsement to do more.

Speaking at separate functions at Akwatia and Asamankese, to round off the tour, to about ten municipalities, districts and constituencies visited in the Region, the President said he had performed creditably well and was confident of another massive vote on December 7.

He also made an appeal for votes for all the 33 parliamentary candidates contesting on the NPP ticket in the region to ensure the NPP had the majority in parliament to support policies and programmes that his second term would bring on board.

The President received a rousing welcome at every town or district visited and notable among them was the durbar at Kyebi, Abetifi, Akwatia, and Asamankese, where a mammoth crowd met the President's arrival around 19hours on Sunday.

In all, the President broke grounds for works to begin on three district hospitals at Achiase, Kwabeng, and Anyinam, commissioned various GETFund projects at Kwahu Bepong, Kwahu Nkwatia, Akyem Oda, and inspected several ongoing projects on roads and infrastructure.

The President, also met with the Eastern Regional House of Chiefs and broke the grounds for the construction of a Zoomlion Waste Recycling and composite Plant in Koforidua and was accompanied by the Senior Minister, Yaw Osafo-Marfo, Eastern Regional Minister, Eric Kwakye-Darfuor, Regional Development Minister, Dan Kwaku Botwe, Roads and Highways Minister, Kwasi Amoako-Atta and many other ministers of state.

At Akwatia, Daasebre Asumadu Nyarko Appiah, Oseawuohene of the Akyerm Abuakwa traditional area and Chief of Akyem Wenchi appealed for the construction of a district hospital to support the St. Dominic Hospital, which happened to be the only hospital in the area and provision of potable water for the people of Akyem Kwamang and Pramkuma.

He disclosed that a 50-acre land had been provided by the traditional authority for the construction of Teacher Training College at Akyem-Wenchi in the Denkyembuor district to support the government's infrastructure improvement in the education sector.

Osabarima Adu Darko, Asamankesehene on his part, appealed to the President to convert a Senior High School in the town, into a boarding facility, establish a Nurses Training School in the area and ensure the completion of the Suhum-Asamankese road.