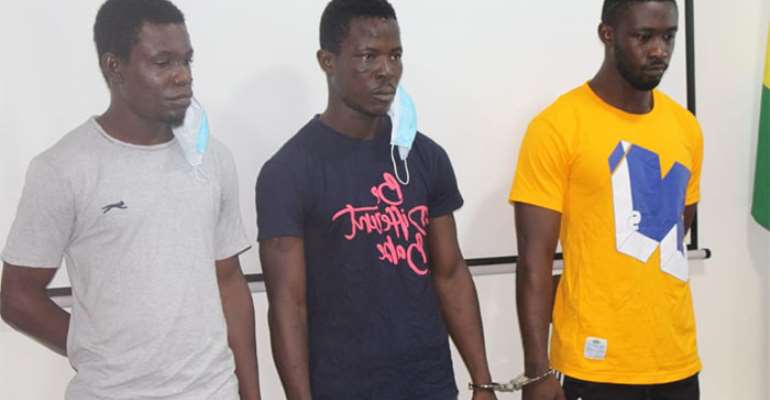 The police officer arrested for car snatching through robbery and subsequent murder.

He used his service rifle in committing the offence.

Lance Corporal Bright Akosah attached to the Formed Police Unit of the Ghana Police Service, alongside two civilians, is in custody for the heinous crime.

The Director General of the Criminal Investigations Department (CID), COP Isaac Ken Yeboah, told the media at a press briefing on Friday that the suspect allegedly committed the offence with civilians identified by the police as Francis Aidoo, a 29-year-old tailor, and Ebenezer Tetteh, a 35-year-old Okada rider.

He said they hired the services of the victim identified as Samuel Tawiah, a 46-year-old taxi driver, to Adjen Kotoku, near Amasaman in the Ga West Municipal Area. On the way, the policeman used his service rifle to shoot the victim three times.

The CID boss said on August 30, 2020, Lance Corporal Akosah hired the service of Samuel Tawiah in charge of a Nissan Versa taxi with registration GW 6818–20 from Pokuase to Adjen Kotoku to inspect his ongoing building project.

He said unknown to the driver, Akosah had his accomplice Ebenezer Tetteh waiting for them in a nearby bush on the road.

“Upon reaching a spot where suspect Tetteh was hiding, Lance Corporal Akosah asked the driver to stop and he got down from the vehicle to shoot the victim twice while he was still sitting behind the steering wheel,” he narrated.

COP Ken Yeboah maintained that with the help of Ebenezer, the two suspects dragged the wounded driver from behind the steering wheel into the bush. To ensure that the victim was dead, Akosah gave him a third shot before they fled the scene with the cab.

“They took the vehicle to Elmina in the Central Region to sell when on September 14, 2020, police had information that the suspects were offering the vehicle for sale at a cost of GH¢8,000 and feigned interest in the deal.

He said the two suspects were later arrested in Cape Coast and brought to Accra for interrogation and that led to the arrest of the third suspect.