Sufi pilgrims to converge on Senegal's holy city despite virus 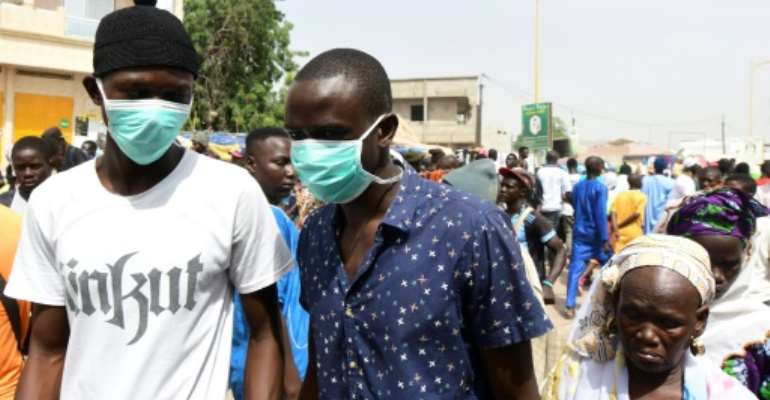 Hordes of pilgrims in Senegal have begun to converge on the holy city of Touba, ahead of a giant traditional celebration on Tuesday known as the Grand Magal, despite the threat of coronavirus.

It is one of the most important dates on the religious calendar in Senegal, and usually attracts hundreds of thousands of worshippers from across the West African country.

But this year's Magal marks the first mass festival of its kind in Senegal since the outbreak of the coronavirus pandemic, raising fears of a potential superspreader event.

Religious authorities are confident they have the situation in control, however.

"We can be reassured because Serigne Touba will erect a shield between the disease and us," the brotherhood's spokesman told local media this month.

In contrast to previous celebrations, the Mourides will hold no official ceremony this year, and will stream conferences online.

Worshippers will also have to wear facemasks, and queue in single file to enter the lavish Great Mosque of Touba.

More than 90 percent of Senegal is Muslim and most of the faithful follow Sufi brotherhoods, which retain considerable economic and political clout in the nation of 16 million people.

The Magal -- when means 'celebration' in the Wolof language -- celebrates the life and teachings of Sheikh Amadou Bamba, the Mouride Brotherhood's founder who died in 1927.

A peaceful opponent of colonialism, French authorities exiled him to Gabon from 1895 to 1902, and then to Mauritania from 1903 to 1907 before he was allowed to return to Senegal, where he was placed under house arrest at his home in the north of the country.

The religious leader founded the holy city of Touba, in the centre of Senegal, in 1888. It has since grown to be Senegal's second-largest after the capital Dakar, with some 1.5 million inhabitants.

As well as being a religious festival, the Magal has a political dimension too, with senior politicians often making an appearance.

Health officials will be keeping a close eye on the huge crowds this year, but the government has endorsed the brotherhood's ability to manage the event.

"If your recommendations are followed to the letter, we can hope for a risk-free Magal," local press reported Senegalese President Macky Sall as telling the current Mouride leader in Touba on Monday.

Health Minister Abdoulaye Diouf Sarr -- who is due in Touba on Thursday -- has also said he was "reassured," adding that he will deploy 5,000 ministry officials to the city.

The move was in line with government anti-virus measures, which included a night-time curfew and a state of emergency. The restrictions were lifted in July.

There are still fears the virus will spread during the Magal, however, and some government departments adopted a more cautious approach.

Microfinance Minister Zahra Iyane Thiam, for example, last month instructed her staff to observe a two-week quarantine if attending the festival, to be taken from their annual holidays.

But the ministry on Friday reversed its decision "in view of the emotion aroused", according to a statement.

Senegalese authorities have recorded over 15,000 coronavirus cases to date, with 311 fatalities.

The Tidianes, another powerful Sufi brotherhood, has not yet decided whether to hold its own annual festival this month, known as the Gamou.

Ghana to receive 1.3 Million Pfizer Vaccines from US Governm...
52 minutes ago

It doesn’t make sense for government to borrow money to recl...
54 minutes ago