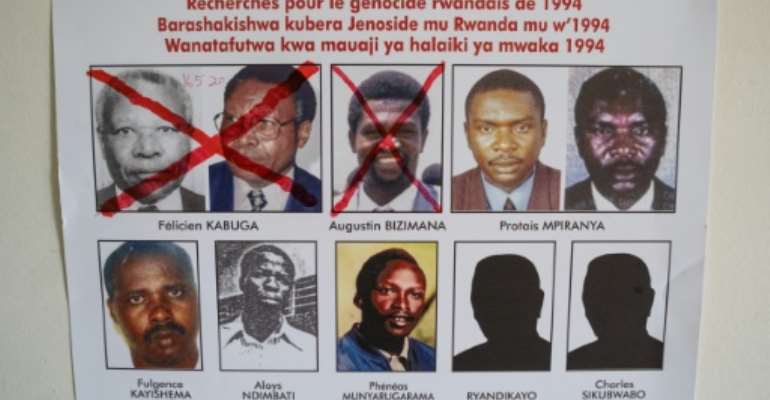 A picture taken on May 19, 2020, shows key suspects in the 1994 Rwandan genocide, on a wanted poster on the wall at the Genocide Fugitive Tracking Unit office in Kigali, Rwanda. By Simon Wohlfahrt (AFP)

Three men suspected of involvement in the 1994 Rwanda genocide have been arrested and charged in Belgium with serious abuse of human rights, the prosecutor's office said Saturday.

The office gave no details about the three but said their identities had been established with the help of witness testimony collected in Rwanda by a Belgian investigation.

"All three have been charged with serious human rights abuses," the spokesman said, confirming a report in the weekly publication Vif/L'Express.

One of the men has been put under electronic surveillance while the two others are in detention, he said.

Whether the men face trial will be "decided in the end by the dossier compiled by the investigating magistrate and the prosecutor's office," Van Duyse said.

"We have demanded their extradition to Rwanda, but we understand that Belgium has an obligation to try them. Our wish is for justice to be done," said Nkusi.

Belgium has held five trials since 2001 of Rwandans implicated in the killings, with four that year -- including two nuns -- sentenced to terms of up to 20 years for handing over Tutsis in their shelter to Hutu militants.

In 2009, Ephrem Nkezabera, a former bank director, was jailed for 30 years after being found guilty of helping to fund the campaign of violence against the Tursi.

Basabose, a wealthy businessman close to the Rwandan authorities, is suspected of helping to finance anti-Tutsi propaganda, according to the country's National Commission for the Fight against Genocides (CNLG).

The Commission said Twahirwa led a militia responsible for massacres in central Rwanda while Ndangali, a teacher and intellectual, is believed to have played a leading role in the exclusion of Tutsis from school as well as savage propaganda against them.

He added the latest arrests sent out "a strong message" to those on the run that they would be held to account.