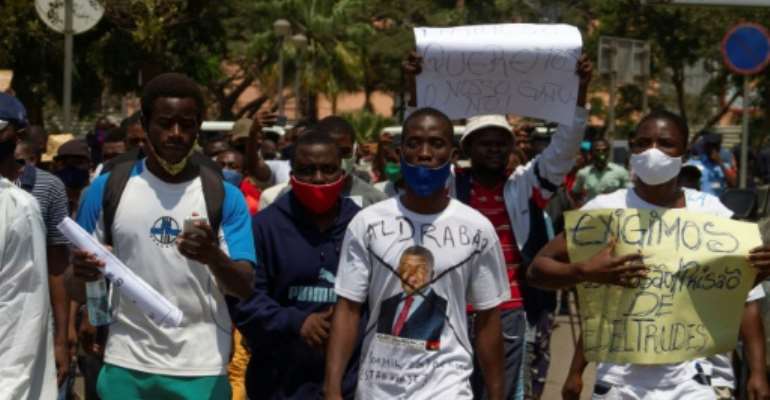 Dozens of Angolans marched on Saturday against alleged state corruption after Portuguese media accused the president's chief of staff of embezzlement, damaging the credibility of an ongoing anti-graft campaign against the former regime.

TVI alleges that Costa transferred public money paid to his businesses to offshore accounts in Panama and Portugal, where it was used to purchase luxury properties.

Neither Lourenco nor Costa have commented on the investigation, which did not get much traction in Portugal, Angola's former colonial ruler.

But the report sparked outrage in Angola, where large pockets of the population live in poverty despite vast oil and mineral reserves.

Around 200 protesters took to the streets in the capital Luanda on Saturday, denouncing high-level corruption and calling on Costa to resign.

Chanting anti-graft slogans, they marched to the presidential palace behind a long white banner that read: "Edeltrudes-Out".

Posters advertising the demonstration showed a photo of Costa against a backdrop of US dollar bills.

"If Mr president does not make the right decision us young people will not stop," 34-year-old protester Palu Antonio de Mello told AFP.

"Thieves should not continue to stay in power... the population wants to be governed by honest people."

The TVI investigation was released in the midst of a Lourenco-led anti-corruption campaign mainly directed at relatives of ex-president Jose Eduardo dos Santos who were appointed to key positions during his almost four-decade rule.

The former president's son Jose Filomeno dos Santos was sentenced to five years in prison in August for diverting oil revenues from Angola's sovereign wealth fund, which he oversaw from 2013 to 2018.

His half-sister Isabel dos Santos is meanwhile being probed for a long list of crimes including mismanagement, embezzlement and money laundering during her stewardship of state oil giant Sonangol.

Both have repeatedly denied the accusations.

Lourenco took power after dos Santos voluntarily stepped down in 2017, leaving a legacy of poverty and nepotism.

"One of the president's stated missions is to fight against corruption" activist Teresa Luterking, 24, said at the protest.

"So we want him to start with the man that shares his desk."