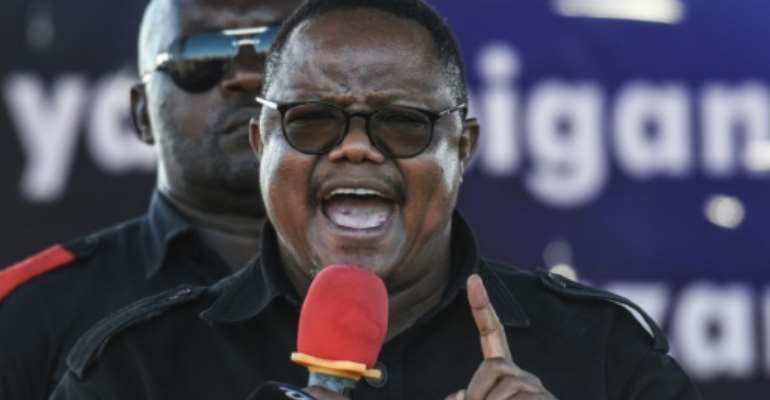 Tundu Lissu denied being given an opportunity to defend himself and vowed to continue campaigning. By Ericky BONIPHACE (AFP/File)

Tanzania's polls commission on Friday announced it was suspending the campaign of opposition leader Tundu Lissu for seven days over "seditious language", as the race heats up ahead of general elections this month.

Lissu, who recently returned from three years in Belgium recovering from a 2017 assassination attempt in which he was shot 16 times, is the main challenger to President John Magufuli and has been drawing massive crowds to his rallies.

The election body said in a statement that its ethics committee had found Lissu had made seditious statements and spread lies while campaigning, after he accused Magufuli of planning to rig the election.

"The committee agreed that Lissu violated the ethics by using seditious language and issued unconfirmed accusations which are both against the election laws," read the statement.

"We therefore suspend Tundu Lissu from campaigning for seven days starting October 3, 2020. He will not be allowed to campaign until after the punishment."

The committee said it wrote a letter to the opposition Chadema party summoning Lissu after the claims but the party had demanded the letter be sent directly to Lissu.

Lissu himself denied being given an opportunity to defend himself and vowed to continue campaigning.

"I never was served with any ethics charges nor afforded the opportunity to submit written defence to the charges," Lissu posted on Twitter.

"This orchestrated 'rough justice' is yet another proof of a discredited NEC (national electoral commission) and a compromised electoral system. The NEC's decision is totally unacceptable. I'll not be intimidated or silenced. The campaign will continue on Sunday as scheduled."

The opposition argues that the election comission, whose members are appointed by the president, is not independent and have repeatedly called for reforms.

Magufuli was elected in 2015 as a no-nonsense, corruption-busting, man-of-the-people, however has been accused of sliding into authoritarianism and brooking no dissent.

During his first term, numerous newspapers and radios have been shut down, journalists have been arrested for insulting the president, and opposition leaders have been killed and arrested.

Earlier this year the United States accused Tanzania of seeking to "stifle democratic norms" ahead of the election.

On Monday police fired teargas at a convoy carrying Lissu, when he tried to stop and address people on an unscheduled campaign stop.