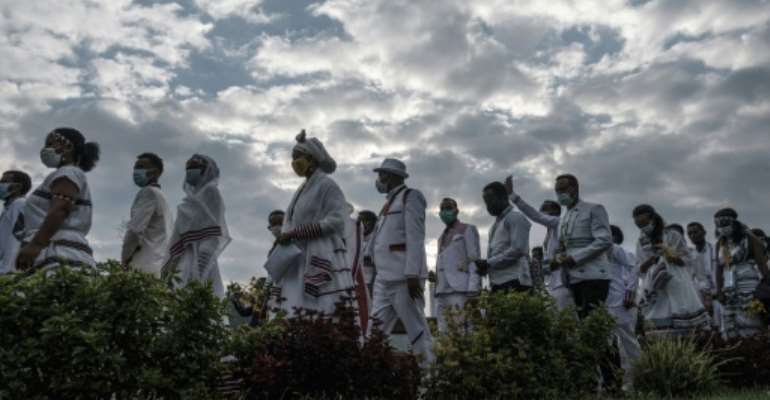 People in traditional clothing march during the celebration of the Oromo people's annual thanksgiving holiday, in Addis Ababa, Ethiopia.. By EDUARDO SOTERAS (AFP)

Members of Ethiopia's largest ethnic group gathered Saturday under heavy security in Addis Ababa for a scaled-back version of their annual thanksgiving festival against a backdrop of unrest and political division.

Prime Minister Abiy Ahmed's government said it was restricting attendance for the Oromo group's Irreecha festival to around 5,000 people to prevent the spread of the coronavirus, just as it did for an Orthodox Christian holiday last week.

But some Irreecha attendees said the regulations were designed to prevent anti-government protests at a time when Oromo opposition politicians are behind bars and security forces stand accused of using heavy-handed tactics against civilians in the Oromo region surrounding the capital.

"When people get together they may reflect on what is going wrong in the country. For fear of that they have restricted us," said Jatani Bonaya, a 26-year-old student.

"What the government is doing is not right," he added.

Irreecha marks the end of the rainy season and the start of the harvest season.

It is traditionally held in the city of Bishoftu, located in Oromia some 50 kilometres (30 miles) southeast of Addis Ababa.

In 2016 the use of tear gas and firearms by security forces sparked a stampede in Bishoftu that killed dozens, some of whom drowned in a nearby lake.

The government put the death toll at 55, though Human Rights Watch later said it could have been in the hundreds.

The following year Irreecha turned into an anti-government protest, part of a broader movement that brought Abiy, Ethiopia's first Oromo ruler, to power in 2018.

People in traditional clothing pose for pictures during the Oromo people's thanksgiving holiday, in Addis Ababa. It comes against a backdrop of unrest and political division.. By EDUARDO SOTERAS (AFP)

Last year Abiy allowed a separate Irreecha celebration to take place for the first time in Addis Ababa and hundreds of thousands turned out.

On Saturday a much smaller crowd led by chanting Oromo traditional leaders gathered at pools of water in central Addis Ababa, where they dipped flowers and sprayed themselves in a gesture symbolising gratitude and renewal.

Tensions between Abiy and Oromo nationalists have been on the rise in recent months following the June killing of Hachalu Hundessa, a pop star who gave voice to Oromo feelings of marginalisation.

More than 160 people were killed in ensuing violence, and more than 9,000 people were caught up in subsequent mass arrests including journalists and prominent Oromo opposition politicians.

Chaltu Lemma, a 22-year-old cousin of Hachalu's, attended Saturday's ceremony and said she hoped it would not be tainted with politics.

"This is our culture, and our culture is independent of religion and politics," she said.

Members of the Abagada (1st row), the Oromo traditional leadership, give their blessing during the Oromo people's thanksgiving holiday, in Addis Ababa. By EDUARDO SOTERAS (AFP)

"We are sad as a family and as a nation that Hachalu was killed. He shouldn't have died. But human beings are born and die... This government will also pass, but Irreecha will outlive all of us."

Abiy's government was clearly worried about security this year.

On Wednesday police staged a military-style parade at which Abiy, winner of last year's Nobel Peace Prize, declared Ethiopia "will not kneel to any enemy in its quest for prosperity".

And on Thursday police announced the arrest of 503 people "intending to cause harm to Irreecha festival-goers", saying they had confiscated more than 100 weapons including grenades and Kalashnikov rifles.

A larger Irreecha ceremony is expected Sunday in Bishoftu.