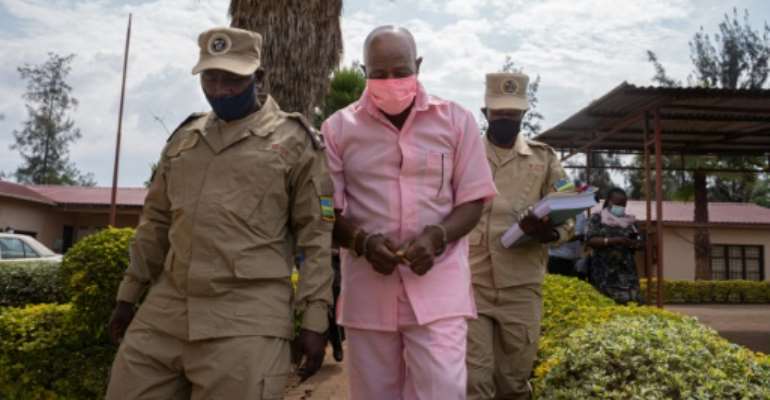 "Hotel Rwanda" hero Paul Rusesabagina is taken into a Kigali court that refused his request for bail. By Simon Wohlfahrt (AFP)

A court in Kigali on Friday denied a request for bail by Paul Rusesabagina, the polarising hero of the movie "Hotel Rwanda," ordering that he remain in custody to stand trial for serious charges including terrorism.

Rusesabagina, whose actions during Rwanda's 1994 genocide inspired the 2004 Oscar-nominated film starring Don Cheadle, had been living in exile for years where he became a high-profile government critic.

But in August he suddenly appeared in Kigali under arrest in murky circumstances, with his family alleging he was kidnapped abroad and taken to Rwanda.

He must answer 13 charges including terrorism, financing and founding militant groups, murder, arson and conspiracy to involve children in armed groups.

The 66-year-old had already been denied bail in a lower court but he appealed the decision, citing poor health.

However Judge Adolphe Udahemuka said Rusesabagina was receiving fine medical care in Rwanda, and deemed he was a flight risk as he holds Belgian citizenship.

"The court therefore finds the reasons provided by the suspect in seeking to be tried while not in custody not convincing. The court dismisses his appeal, and rules that the suspect remains in custody pending trial," Udahemuka said.

"Unfortunately we can't appeal against this ruling. We will continue pushing for his release but now we prepare for the substantive phase of the trial," she told reporters after the ruling.

Rusesabagina is credited with sheltering hundreds of Rwandans inside a hotel he managed during the 1994 genocide, in which 800,000 mostly Tutsis but also moderate Hutus were slaughtered.

But in the years after Hollywood made him an international celebrity, a more complex image emerged of the staunch government critic, whose tirades against the regime of long-serving Rwandan ruler Paul Kagame made him an enemy of the state.

Rusesabagina's family say his lawyers were not of his choosing accuse his legal team of acting for the state. By Simon Wohlfahrt (AFP)

He admitted in court to helping form the National Liberation Front (FLN), an armed movement he previously said sought to liberate Rwanda from Kagame.

The president has been in power since 1994 and is accused by critics of crushing opponents and ruling through fear.

Rusesabagina's family, who say he would never have returned to Rwanda by his own free will, claim his lawyers were not of his choosing, and have accused his legal team of acting for the state.

"My dad is surrounded by people who want him to fall," his son Tresor Rusesabagina said Thursday.

It remains unclear how Rusesabagina -- a moderate Hutu who left Rwanda in 1996, wary that space for political opposition was shrinking -- wound up in handcuffs in Kigali and paraded before cameras.

In an interview with The New York Times, Rusesabagina, speaking with Rwandan officials in the room, said he boarded a private jet in Dubai which he thought was taking him to Burundi, but landed in Kigali instead.