The World Bank Warns Ghana Against Such Destructive Practices As Galamsey 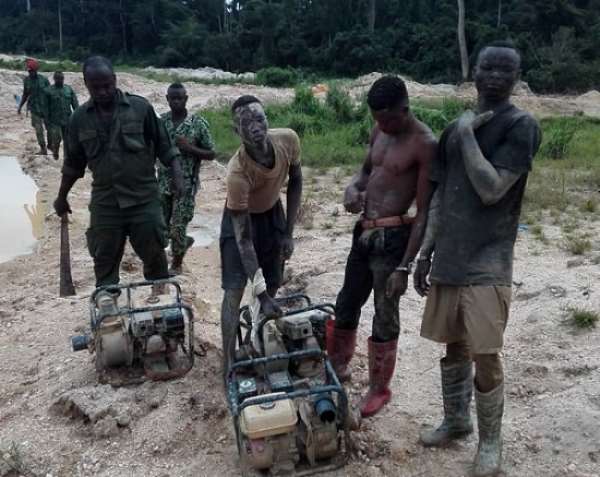 THE World Bank usually prefers to point out the economic and social mistakes of its members countries to them at meetings that take place in private. A statement made up of a few lines may be issued at the end of such discussions, but usually, all that such statements say is that as a result of recent discussions, the Bank was making resources available to the member country, for specified purposes, BLAHN BLAH, BLAH!

But if one dismisses such Reports as diplomatic guff, one would be making a serious mistake. For the Bank does possess very strong analytical instruments, in the form of teams of multi-disciplined experts who can zoom in on a specific socio-economic problem in a selected country, flawlessly diagnose the factors that have created the problem, and offer concrete suggestions for their elimination.

In this connection, I vividly remember (with great regret) a study the Bank made of the growing pains of our capital, Accra, around the beginning of the 1970s, which came to nothing. The Bank did a thorough study of the water and sewerage problems of our expanding capital, persuaded the Government of the day to implement the plan, and a contract was awarded for the initial work to begin.

The work caused many of Accra's roads to be dug for pipes to be laid, both for the supply of water and the carting of sewerage. If that project had been completed, we wouldn't be seeing the flooding that occurs in Accra after heavy rainfall. Septic tanks would also have ceased to form part of many buildings. Some of our open gutters would have been covered, and the ugly sights we see of stinking garbage collecting by the roadside in gutters filled to the brim, would have been a thing of the past.

But for some unstated reasons, the project was peremptorily abandoned! And , as we have seen, the relentless expansion of Accra has thrown up nightmarish problems that call for a second look at the abandoned World Bank project. Of course, it will cost more now than it would have done at the time if we'd had the courage to implement it fully.

It is good that the institutional memory of the The World Bank does not incorporate grudges, for the Bank has done Ghana favour by producing a fantastic, new Report which sets out in great detail, the cost of the environmental degradation that we are blindly wreaking on our country. Entitled ”Ghana – Country Environmental Analysis”, the study looks at such problems as air pollution, deforestation and soil erosion, and (a subject close to my own heart) galamsey.

The Report states, quite unequivocally, that “environmental degradation is costing Ghana $6.3billion annually” or nearly 11 percent of the country’s Gross Domestic” as realised in 2017.

I shall, of course, commence my discussion of the Report with what the report has to say about galamsey. It notes that “Artisanal and small-scale gold mining” is a contributor to national wealth and poverty reduction. Production in the sector has increased substantially since 2010, in response to high gold prices, high unemployment, and a slump in agricultural production. However, much of this increase was owed to “illegal mining” or galamsey.

National galamsey employment numbers, though unknown, are quite high, with estimates range from 500,000 to 1.1 million workers. This implies that the informal gold mining economy may employ the equivalent of four to eight percent of Ghana’s workforce. But although the activity is acknowledged as “widespread”, the full geographic extent of galamsey is unknown, as data are limited, due to the clandestine nature of galamsey operations.

One 2018 study identified 7,470 galamsey operations in 312 towns and villages, an average of 24 per locale, in the Western Region alone.

Illegal mining “leads to deforestation and loss of biodiversity, accelerates soil erosion and sedimentation, and water and air pollution,” the Report points out.

It adds: “ Increased turbidity, sediment loading, and heavy metal contamination in the Pra and Birim Rivers are attributed to galamsey, disrupting aquatic environments and fisheries and threatening access to potable water.”

The Report also reveals that “mineral belts coincide with Ghana’s remaining forested areas, posing a massive deforestation and forest degradation risk. The destruction of farmlands in galamsey areas has engendered food security issues, including increases in the price of staple crops”.

The World Bank Report further warns that “Gold and cocoa (especially) maintain an uneasy coexistence” and that “galamsey is a likely contributor to decreased cocoa health and yields.”

Meanwhile, a Professor at the Institute of Environment and Sanitation Studies at the University of Ghana has revealed that the use of mercury for illegal mining has psychological side effects on children in the mining area.

Professor Chris Gordon said the inhalation of the chemical substance used by the ‘galamseyers’ “poses a threat to the brain development of children that will effectively impede their overall academic performance.”

“They [galamseyers] use a substance called mercury to extract the gold from the ore, [which] when it is inhaled, has an impact on brain cells.”

(The World Bank Report made a link between the lowered IQ and the artisanal mining, when it found that children growing in these areas tend to be daft!) So, in effect, whilst galamsey is destroying cocoa farms and water-bodies that affect the current generation of Ghanaians, it is also laying the groundwork to ensure that their progeny does not grow up with the brains that can ensure their survival in the face of environmental and similar difficulties!