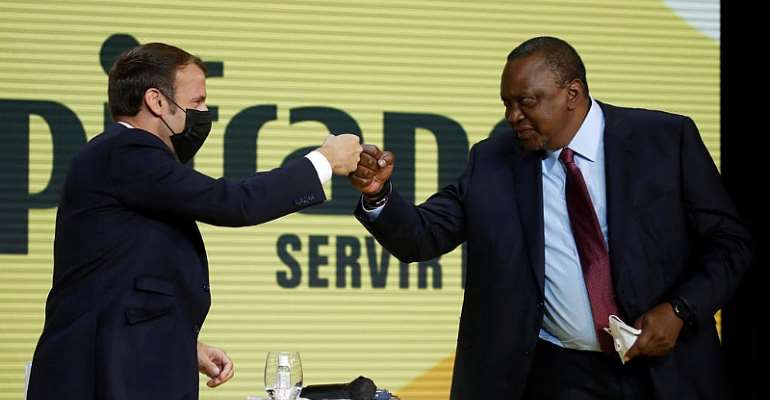 French President Emmanuel Macron has announced a summit in May to review the way Western countries fund African economies, saying that investments were often high-risk, making African nations more inclined to turn to China than the West.

"Why is it that for several years, a country like Kenya has turned a lot to China?" Macron said Thursday during a tech conference by French investment bank Bpifrance in Paris.

"It's because China provided funding and turnkey solutions, along with ultra-competitive investments, which did not respect the rules of the OECD," he said.

The French president has called for the Organisation for Economic Co-operation and Development rules -- which have often made African countries take unnecessary risks -- to be changed.

At the Paris business conference, attended by visiting guest Kenyan President Uhuru Kenyatta, Macron pledged to hold a summit next May to "redefine together the rules of African financing", in order to play by a set of conditions which are bearable for the African continent.

The planned summit is in line with calls by the French government to ease African debt to enable countries to fight against the coronavirus.

It also gives France another occasion to portray itself as a champion of the continent's interests.

"If we don't succeed in helping Africa develop, we, Europeans, will pay the price and will only continue to speak of Africa in terms of the migration suffered by a youth whom we failed to offer opportunities on their own continent," Macron said, all the while insisting that Africa has "extraordinary development potential".

Under the current French leader, Paris has increasingly expanded its footprint beyond the North and West African markets, where it has been active since the colonial era, towards East Africa.

Uhuru Kenyatta, who exhorted French entrepreneurs to "seize the opportunities which exist" in Kenya and in Africa, signed three major infrastructure projects with French companies.

Infrastructure giant Vinci Concessions made its first foray into the continent with a 1.3 billion euros public private partnership (PPP) to build and operate a 175 km highway from Nairobi to Mau, one of the largest PPP projects in the region.

Other agreements included the development of the Nairobi Central Business District (CBD) and a commuter railway line to Jomo Kenyatta International Airport.

Along with foreign direct investment, Kenyatta is hoping to boost Kenya's exports of mainly fruit and vegetables to Europe's second-largest market.

Over 100 French companies are operating in the East African nation in sectors including hospitality, energy, luxury goods and retail.