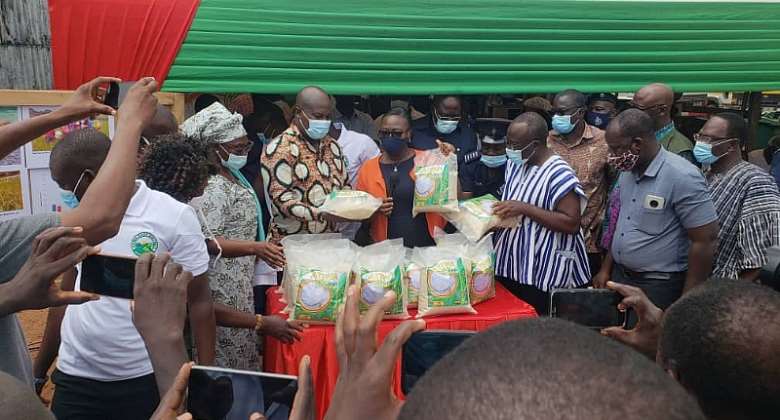 The Atiwa East District is part of the seventeen districts in the Eastern Region that contribute to Rice farming in the country. In 2019, the district contributed about 1100 tonnes the rice that was produced in the country. Currently, the district has over 300 rice farmers under the Special Rice Initiative Programme who are expected to produce 1900 tonnes of rice by the close of the year.

The Department of Agriculture held a Rice day as part of the government's Special Rice Initiative Programme. In attendance to the program was the District Chief Executive of Atiwa East District; Hon. Lawyer Kwabena Panin Nkansah, Regional Director of Agric; Mr. Henry Kobina Crenstil, Executives from Modernizing Agric in Ghana(MAG),

He applauded the efforts of the government for the Special Rice Initiative. He said that the District is very interested in rice production.

He explained that the District Assembly has supported farmers with Rice nets and facilitated the start of a satellite market in Sekyere along the main Accra-Kumasi road. He promised that the Assembly was committed to seeing the commencement of the Satellite market.

The Regional Director for Agriculture, Mr Crenstil said that market linkages and creation of satellite markets is being added to extension services. He explained that the agenda is set to promote at least one commodity from the production state to the finished packaged product.

He said that this will add value and improve on the quality of commodities. He added that Atiwa East District has the potential for establishing a large market for rice and the step to brand and package it contributes to the vision of improving on the quality of rice grown in the country. He encouraged the Department and farmers to do their best in contributing to the Ministry’s goal for becoming a Rice Sufficient country by 2024.

Mr. Ebo Graham, who doubles as the project manager at Hopeline Institute and a project manager under the AGRA rice project said that Rice production was gradually spreading out in Eastern Region.

He said that all that support is to strengthen farmers in the government's agenda to cut the importation of rice.

The president of the Ghana Rice Inter-professional Body(GRIB) explained the need to be part of the association. He mentioned that the government will only sponsor farmers with inputs for rice production through GRIB. He explained that power tillers are available to be given to members to be paid for a period of two years. He encouraged farmers to join GRIB because it promises to unite and forward concerns of farmers to the government.

Executives of the Atiwa East District Ghana Rice Inter-professional Body were inaugurated. The executives were commissioned to support the production of rice in the district in their mandate as executives.

The Rice Day Celebration also saw the launch of the Atiwa Rice. Madam Birikorang Stephania commended the initiative to package the rice. She advised that the Department should take the steps to get the approval of the standards authority, She explained that, that would expand the market and meet international standards.

Mr Ebo Graham said that the standards under the Ghana rice project standards have been outlined by GRIB, Hopeline Institute, JAK foundation and the Ghana Standards Board for the Rice Mills and Rice paddy standards. He promised that the initial cost for standardization for Atiwa Rice will be sponsored by GRIB for being a member of the body.

There was a taste test of various foods prepared from the Atiwa Rice. Participants of the celebration were served with a number of dishes.

The Atiwa East District Director of Agric, Mr. Samuel Ofosu thanked sponsors of the Rice Day Celebration. He said that, the Atiwa East Department of Agriculture was opened to investors and private partnership for production of rice.