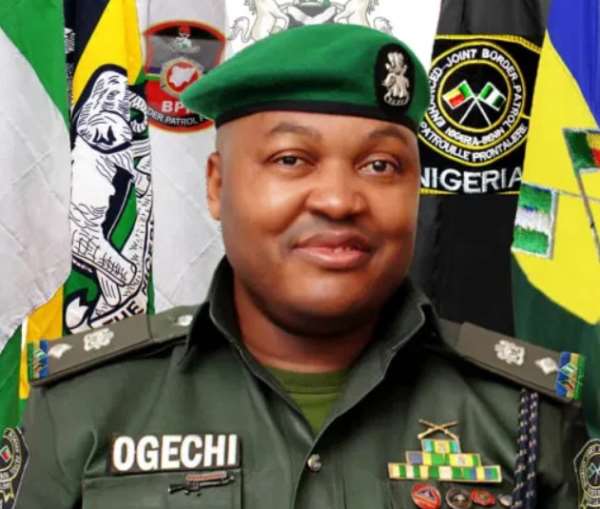 In a bid to boost rice production in Nigeria and pave the way for self-reliance, the President shut the country’s land borders and rice farmers went into overdrive nationwide. It was time to take Nigeria back from foreign nations that have turned the country to a dumping ground for foodstuffs.

Besides the protection of locally manufactured goods, the move was also against smuggling of oil products out of Nigeria, and the inflow of small arms and drugs into the country.

To achieve this objective, the Federal Government through the Inspector-General of Police (IGP) Mohammed Adamu appointed a seasoned officer from the high-pressure world of law enforcement, Chief Superintendent of Police (CSP) Udu Moses Ogechi, to lead a coalition force of border guards drawn from various security agencies to keep smugglers at bay.

The Presidential Task Force christened Enhanced Nigeria-Benin Joint Border Patrol has its operational headquarters at the ever-busy Seme Border, in Badagry area of Lagos. It has done much in reshaping the future of the nation.

Four days before Nigeria closed the border without warning, security agents had intercepted truckloads of prohibited tramadol and codeine, and Customs officers had earlier impounded loads of Pump Action Rifles smuggled into the country.

Today, with the Presidential Task Force at work, it is easier for a camel to pass through the eye of a needle than for anyone to smuggle banned items across the Nigerian Border.

In fact, one of the accomplishments that the President proudly celebrated in his Democracy Day address, on June 12, was the efficiency of police officers and other security agents involved in the special operation to keep Nigeria’s borders safe.

“To reduce security challenges through our external borders especially smuggling of oil products out of the country, inflow of small arms and drugs into the country and equally protect our local manufacturers, we introduced operation ‘Ex-Swift Response’ closing our borders from August 20th 2019, and have considerably succeeded in meeting its objectives as well as improving our national revenue,” the President said in his broadcast.

Although, it has not gone down well with neighboring countries, the border closure has been described by Nigerian officials as one visionary and pro-active move against the spread of the novel coronavirus which the World Health Organization (WHO) first reported on December 31, 2019.

Day and night, Ogechi’s men are seen maneuvering their patrol vehicles through neighborhoods along the border, risking life and limb to protect and serve the nation.

Before he was singled out for the task of carrying out the presidential mandate of securing Nigeria’s most strategic land border, Ogechi had served as the Squadron Commander, MOPOL 43, Lion Building; Commander in charge of Diplomatic Missions and the Commander, Lion Building.

Ogechi who hailed from Akaeze, at Ivo LGA, in Ebonyi State, had served as the Commander, Federal Task Force on Narcotic and Counterfeit Drugs under the late Dr Dora Akunyili, and had contributed largely to the successes recorded in the war against fake drugs. He led the operations.

During his years at NAFDAC, he led the sanitization of Onitsha Head Bridge drug market, where illicit drugs worth billions of naira were confiscated, along with arms and ammunition.

The ongoing Border patrol mission has witnessed seizures of contraband goods worth billions of Naira and the seizure of weapons and illicit drugs.

According to the Minister of Information, Alhaji Lai Mohammed and the CBN Governor, Godwin Emefiele who visited the Seme Border recently, Ogechi’s activities have earned Nigeria huge revenue.