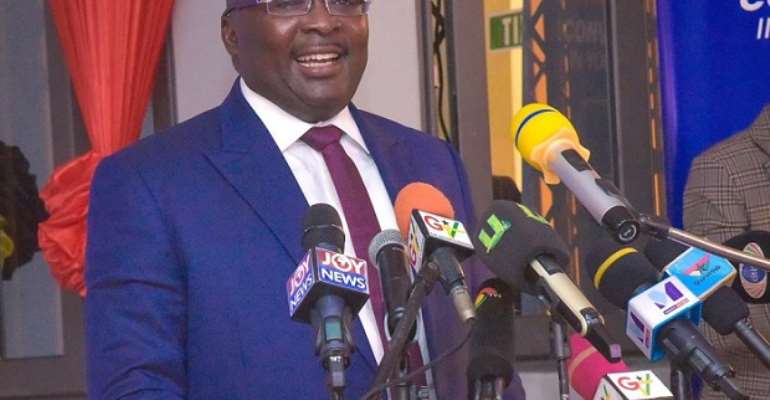 Vice President Dr Mahamudu Bawumia has said the Akufo-Addo administration has managed the country's debt stock better than its predecessors, despite the nominal increase of the stock.

Speaking in an interview on Asempa FM on Wednesday, the Vice-President added, “In any case, even if you include the financial sector bailout, you see a major reduction in the growth of the debt to GDP ratio.”

He indicated that anyone in doubt could look at the economic fundamentals, intimating that “because if your debt stock is growing uncontrollably, it will reflect in the movement of interest rate in the country.”

“So what was happening during the period of the NDC when they were increasing the debt stock, you saw the interest rate going up and exchange rate depreciating, while inflation was galloping.”

He pointed out that even though the debt stock had nominally gone up, the government was using less proportion of the country's income to service the debt because they, as managers, had sought to move the debt to a longer-dated format instead of the shorter-dated format that existed under the NDC regime.

The Vice-President, who is in charge of the government's economic management team, stated that the debt stock had increased for a number of reasons, and the people could not run away from them.

“When the NDC left office, they had negotiated power purchase arrangements and 60 per cent of what they had negotiated we didn't need. We were left with excess capacity charges close to US$1 billion yearly for power we don't produce. There is not much we can do.”

The financial sector bailout has cost this country about GH¢21 billion and we face the situation and you want to say you won't pay?

“People's deposits with the banks, savings and loans as well as microfinance companies and you say you won't pay because the debt stock is going up. You don't have a choice. There were 4.6 million depositors. We had to find the money to pay them.”

He explained that the stock had gone up because of the major infrastructural projects which were being undertaken, adding that “all these have contributed to the increase in the debt stock, but we are managing it very, very well.”

For the Vice-President, what matters is the impact the increase in the debt stock will have on inflation, interest rate and the exchange rate.

According to him, while the stock of debt had increased, inflation and interest rates had come down, adding that the exchange rate had also depreciated by 50 less per cent than what was under the NDC administration.

“This year, notwithstanding COVID-19 and everything that this economy has been going through, the exchange rate depreciation so far is around two per cent – that is annual depreciation. It is amazing,” he stated.

When the host asked whether the slowdown was not as a result of inactivity in the economy because of the COVID-19, Dr. Bawumia argued that “the same thing would apply to many other economies, but we are looking at reality performance of Ghana and we are one of the best performing currencies against the dollar, right now.”

“Because everybody is feeling the impact of COVID-19 and I think the Bank of Ghana has managed this very well. Their introduction of forward sales really helped in reducing uncertainty in the market and there is a lot more confidence with the management of the economy, and that confidence is also translating into the foreign exchange market.”