Fact-Check: False! Mahama Did Not Distribute Cash To Supporters In Berekum 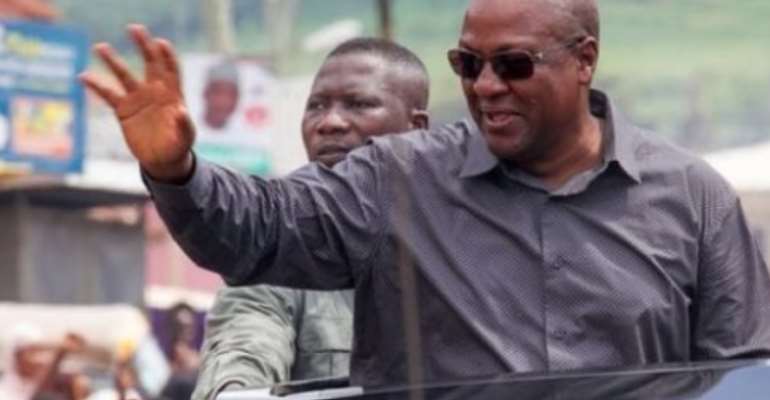 Verdict: False. While one of the videos used as the basis for the claim is a 2016 campaign video, the others showed him sharing an item that is black with white straps and a white towel but not money.

Many social media users claim that Ghana'sformer president and flagbearer of the National Democratic Congress (NDC) in the 2020 elections, John Dramani Mahama, has been captured on video distributing cash to some party supporters during a campaign tour in Berekum in the Bono region.

The claims have been made on pro-government facebook pages including NPP projects bureau and on Twitter . The posts have gained more than 8,000 views.

The claims are accompanied by a video that shows the former president standing out of a vehicle's sunroof while the vehicle and others in the convoy are mobbed by several individuals clad in colours of the NDC; red, white, green and black.

Some news portals such as GhPage also indicated that the presidential candidate distributed money to supporters: “The NDC Presidential candidate John Dramani Mahama in the course of his campaign tour has visited Berekum in the Bono Region today 28th September 2020. John Mahama in the middle of his street cavalcade pulled wads of cash from his car and gave it to some of the crowded party adherents on the streets.”

The official Twitter page of the NDC has, through a statement signed by James Agyenim-Boateng, the party's campaign spokesperson, denied the claims of John Mahama distributing money.

“The said reports are untrue and completely borne out of the desperate and fertile imaginations of the author(s)… As it has become typical of Mr. Mahama on his campaign tour of the regions, he shares JOHN MAHAMA 2020 branded nose masks to people…,” the NDC's statement indicated.

We investigated the claims.

We have seen two different videos making the rounds on social media, all making the claim that the NDC flagbearer was sharing money to party supporters during his campaign tour.

We fact-checked each of the videos below:

Video 1 , shared on the NPP Projects Bureau facebook page on 28th September, 2020 with the caption “This is video of John Mahama sharing Money in Berekum, where are the Nose Masks, Apron and T-shirts they claimed to be sharing not money? December 7 will expose you!!”

A reverse image search conducted on some frames of the video showed that it is an old video of Mr. Mahama on a campaign. The results matched a similar video uploaded by Joy News to their YouTube channel on September 21, 2016.

In both videos, John Mahama is seen in a black polo shirt and a white baseball cap. The background visuals were the same.

A google search on the subject showed news reports pointing to the video being taken at Abossey Okai in Accra in 2016.

Given the evidence above, we find NPP Projects Bureau's claim that Video 1 was evidence of John Mahama sharing money in Berekum in 2020 to be false.

Shared by a twitter user who is prone to sharing Pro-NPP content on his timeline, the second video shows John Mahama on his recent Berekum visit. The video is accompanied with the text; “John Mahama sharing money on his campaign tour in Berekum, Bono Region. Is Government Official One that desperate? Votes buying come inside? #RejectConMahama ”.

The NDC presidential candidate is seen standing out of the sunroof of his vehicle in a deep blue shirt and with many of his followers surrounding the vehicle. Although the video is dark and not very clear, it is noticeable that he does at a point hand out something to some people.

At exactly 16 seconds into the 42-second video, John Mahama is seen taking and handing out the item to someone around the front-side of the vehicle and later tossing another into the crown on his left.

We were able to find a fuller version of the same video shared by a Facebook user, Enoch Kofi Nyarkoh with the caption: “John Mahama sharing money on his campaign tour in Berekum..Asem no aye kese oooo.” That video has been watched more than 9,000 times.

Analyzing the video in slow motion and in reverse motion between 19 seconds and 25 seconds, we found that the items handed out to the supporters were black with a touch of white.

The first frame showed the NDC flagbearer slide the item down the vehicle windscreen. The second frame shows him holding the black item while the third frame gives a better view of the item after he tossed it into the crowd.

The nature of the item and how it was tossed does not prove to be money.

At the 10 seconds mark of the video, the white piece of cloth which looked like a little towel was tossed into the crowd by the NDC flagbearer.

The object seen in no way appears to be money as claimed.

Based on the evidence above, we conclude that the item John Mahama gave to party supporters on his tour of Berekum is not money as claimed.

The reporter, Jonas Nyabor, produced this fact-check under the auspices of the Dubawa 2020 Fellowship in partnership with Citinewsroom to facilitate the ethos of “truth” in journalism and to enhance media literacy in the country.