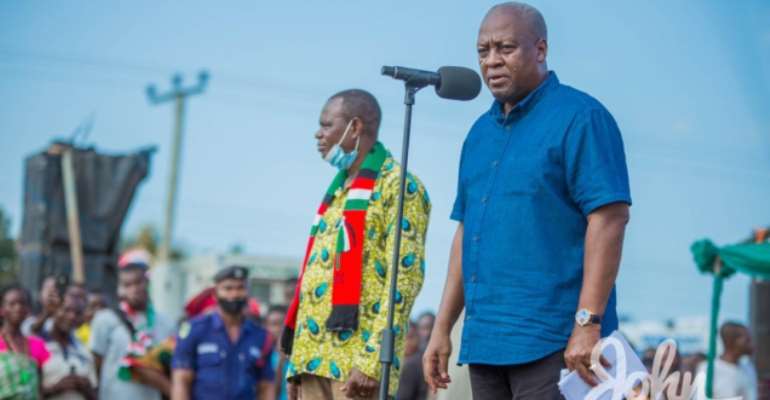 Former President John Dramani Mahama says the NPP government has so far secured over GHS140 billion in loans since assuming office yet there is nothing to show for the amount borrowed.

Speaking to the chiefs and people of Sampa in the Jaman North constituency as part of his tour of the Bono Region, the NDC flagbearer challenged President Akufo-Addo to list developmental projects he has used the loans for.

“When I was in government, we borrowed GHS54 billion and Ghanaians could visibly see what we used the money for in the area of roads, water, electricity, airport, harbour, schools among others. The then opposition New Patriotic Party accused the NDC government of borrowing too much. They promised to develop Ghana without taking loans but after staying in office for almost four years, do you know how much they have borrowed? The NPP government has borrowed 140 billion. What is sad is that we do not know what they have used the money for. When you ask them, they do not have anything to show. So what are they using the money for?”

Ahead of the 2020 polls, the Akufo-Addo administration has centred its campaign on the issue of infrastructure after it announced that it has initiated over 17,000 infrastructural projects in various parts of the country.

It noted that 8,746 of the projects have been completed while the remaining are ongoing.

The government has also set up a website to track its infrastructural projects.

But Mr. Mahama suggests that this is hypocritical from the Akufo-Addo administration following recent media debates between the two biggest political parties in the country.

The former President feels a debate will be an adequate avenue for the comparison of records.

But the NPP says, such a debate is not needed because there is no doubt it has delivered superior infrastructure than the NDC.