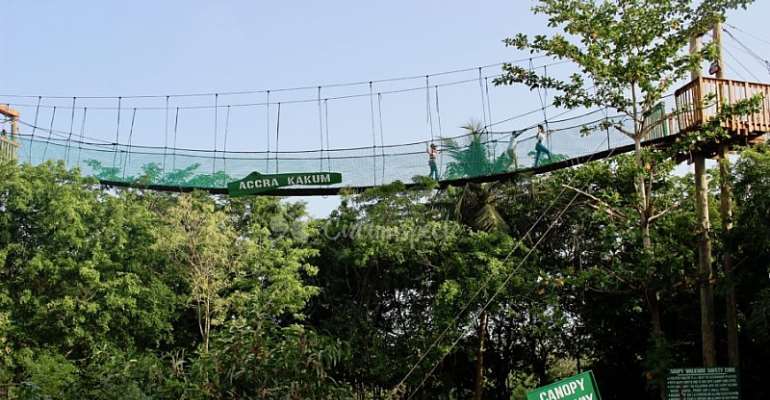 Favourite nephew,
Please don't waste your thought-energy even mentioning those people, who won't lift a finger to save anything - let alone transform what was a study-in-neglect, which I remember only too well, from the late 90s, into a model city park, today.

Massa, I used to go the Legon Botanical Gardens, to buy plants, for the place I then lived, at Haatso - and also saw in my mind's eye, what you envisaged then, and for which you worked hard, to get a public-private partnership (PPP), in place, to enable you put your plan for its transformation, in motion.

And, look at how you have followed that image then in your mind's eye, and which you always let yourself be guided by, to enable you create a unique city park, which, today, makes such a huge difference to Accra's many nature lovers - now sadly stuck in a fast-expanding concrete jungle, with increasingly poor-quality air, hampered by unexpected-and-therefore-unplanned urban-development, in which the rich and powerful, constantly manipulate the system, to acquire common-good green-spaces, hithereto reserved for parks, by getting them rezoned by corrupt local officials, for high-rise-development. Massa, wu, eni size, wai. Haaba.

So, do please stop wasting time on such negative people - ahhh, you paaaa. Speaking of which, a similar opportunity awaits you, in the Gomoa Buduburam Camp Liberia refugee settlement area.

As it happens, there is a place in the Camp Liberia refugee settlement area, known as the Gap, which you too will immediately see, in your mind's eye, as the perfect study-in-neglect, which could also be dramatically transformed, to give people in the whole of Gomoa Buduburam, and it's adjoining environs, a health-giving immune-boosting oxygen-laden, and, delightful community park.

Unfortunately, today, it is a very sad and neglected place, mostly peopled by the marginalised, in Camp Liberia's base-of-the-pyramid demographic - in a place apparently in the grip of a ruthless self-seeking-Mafia, according to bush-telegraph sources, who are allegedly profiting mightily, from the exploitation of the miserable conditions, which many of the refugees have to grapple with, on a daily basis.

Favourite nephew, I will introduce you to the charismatic Chief of Gomoa Buduburam, Nana Kwaw Bediako, who happens to be an ebullient Pan-Africanist, and Nkrumahist, who happens to have known the great man, himself. Imagine that.

What luck, favourite nephew - a brilliant minded senior, who actually knew President Nkrumah: whose equal has still not been born. Imagine that, Massa.

I am in heaven, as you can imagine, Let's use our personal networks, to help him transform Gomoa Buduburam into a model rural community (now more peri-urban, than rural, incidentally), which is prosperous, and is also an environmental showcase.

Kofi, there is so much we can do to help him, in that noble task. For example, could we not use our personal networks ,to have the Gomoa Buduburam Camp Liberia refugee settlement area, eventually declared a World Heritage Site?

That will stop the demolishing of the tiny houses that abound there, and, with the help of the Dutch Tiny House Movement, renovate all of them (creating jobs galore in the process), and let them become the centrepiece ecotourism attraction, without compare, in the Central Region, ooooo, Massa. So let's get cracking, favourite nephew, adwumawura. Cool.