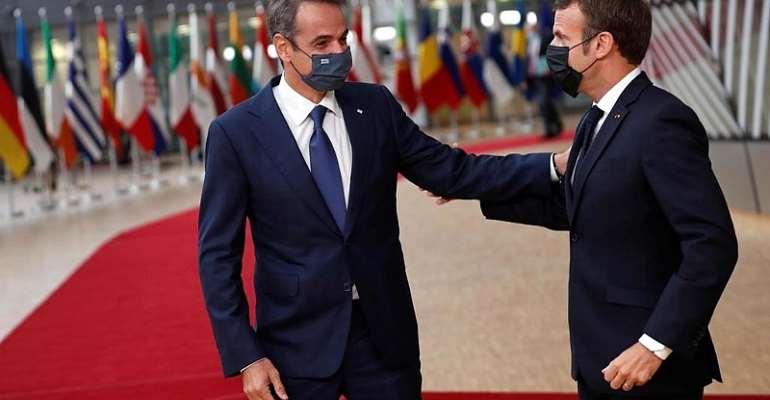 French President Emmanuel Macron has warned that Europe's solidarity with member states Greece and Cyprus must be "non-negotiable" at an EU summit to address tensions with Turkey in the eastern Mediterranean.

Over dinner on Thursday they will look at ties with Turkey, which is notionally still a candidate to join the EU but is in a maritime stand-off with Greece and Cyprus over maritime borders and energy resources in the eastern Mediterranean.

Ankara has infuriated the EU by sending research ships with naval escorts to work in contested waters, and Athens has responded with war games backed by France, raising fears of full-blown conflict.

In his summit invitation, European Council president Charles Michel warned that "all options remain on the table" if Ankara does not engage constructively in talks.

Among the options are tough economic sanctions against Turkey, but officials stress that the focus for now is on trying to find a diplomatic solution.

"We've seen positive developments on Ankara's behalf towards Greece but not Cyprus," an EU official said, citing the start of a German-led mediation effort.

Meanwhile, Cyprus has been blocking long-trailed sanctions over the political crisis in Belarus, insisting on actions over Turkish drilling in its waters at the same time.

The EU has drawn up a list of 40 Belarus officials seen as responsible for post-election repression in the country. They will face sanctions if Cyprus drops its roadblock.

The leaders will discuss whether to include Belarus's leader Alexander Lukashenko on the sanctions list, as Canada and Britain have already done.

Also under discussion will be the 750 billion euro coronavirus stimulus fund, to be backed by a trillion-euro long-term EU budget, agreed by national leaders in July.

The speaker of the European Parliament, David Sassoli, will warn the leaders that MEPs oppose cuts to key EU programmes in the budget plan and want 100 billion euros more.

The parliament could yet withhold approval for the package, and Hungary and Poland could also block the deal if their access to funds is linked to their respect for EU legal and democratic values.

A German compromise proposal, which would see states fined only for rule of law breaches involving the spending of EU funds, narrowly won the support of EU ambassadors ahead of the summit on Wednesday.